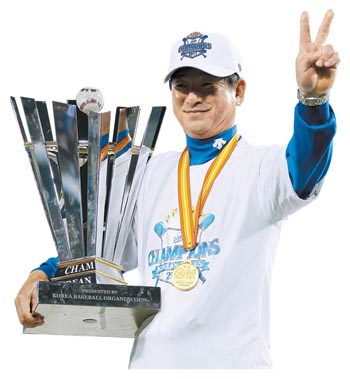 After leading the Daegu Samsung Lions to the 2011 Korean Series crown against the Incheon SK Wyverns last week, Ryu Joong-il made history in the Korea Baseball Organization by becoming the first manager to win the title for a club where he was once considered a franchise star.

The term “franchise player” is normally given to athletes who are the face of their club - players that a franchise can build its team around. Usually such players display solid performance, a strong mentality and a consistent career.

As an athlete, Ryu met these criteria. Before taking charge of the Lions this season, the 48-year-old spent 13 years as a player and 11 years as an assistant coach.

The two-time Golden Glove award-winning shortstop was also the first player in Lions’ history to have a farewell ceremony when he announced his retirement in 1999.

But Ryu is not the first player to take the helm of his franchise in the KBO. Since the league started in 1982, more than six players have become managers of clubs where they once played, but none of them brought the championship ring to their franchise.

Only two former managers - Kim Yong-hee from the Busan Lotte Giants and Kim Kyung-moon from the Seoul Doosan Bears - got close by reaching the Korean Series, but the jinx was finally broken by Ryu.

The K-League could also have successful coaching stories from three other franchise stars - Pohang Steelers’ Hwang Sun-hong, FC Seoul’s Choi Yong-soo and Suwon Samsung Bluewings’ Yoon Sung-hyo - as they are all currently in the six-team playoffs.

Franchise stars-turned-coaches in other professional sports are also considered dark horses or perhaps title contenders this season, highlighting the issue of franchise stars succeeding with their beloved club.

In the Korean Professional Volleyball League, Cheonan Hyundai Capital Skywalkers’ Ha Jong-hwa, who spent 11 years as a player and assistant coach for the franchise, is hoping to extend the team’s successful legacy, while in the Korean Basketball League, Anyang Korea Ginseng Corporation’s Lee Sang-beom, who spent 19 years as player and assistant coach with the team, is looking to bring home the franchise’s first trophy.

“Professional sports are all about what the franchise is doing,” said Professor Kim Chong, who teaches sports industry at Hanyang University. “If franchise stars can help their team even when they become coaches and generate more support from fans, it will not only bring a positive effect to their own franchise but also escalate the development of the whole league.” 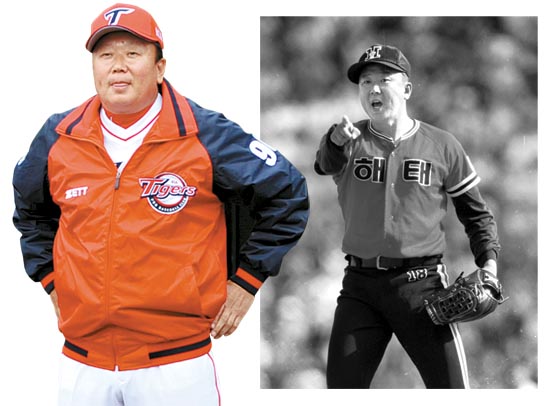 When the Tigers appointed Sun as their new manager on Oct. 21, the team said in a statement that it chose the 48-year-old because he knows “the Tigers spirit and is the right one to carry out the legacy.”

Sun played his entire 11-year KBO career with the Tigers, which were previously owned by the confectionery company Haitai. He won three most valuable player honors and helped the Tigers win six KBO championships.

Sports experts said most teams that pick a franchise star as a new coach will give a reason like the Tigers, claiming the person represents the team’s style and has roots with the club.

But beyond those reasons, experts said the clubs ultimately expect more fans to visit the stadium, increasing the popularity of the franchise and also revenue.

“Fans can be more attached to the club since the manager can bring nostalgia to them,” Kim said. “It brings a good promotional opportunity to both team and coach.”

In fact, the Lions, which also claimed the KBO regular season title with Ryu, saw a big increase in home crowds as more than 500,000 fans visited Daegu Stadium during the regular season, up 11.7 percent from last year.

Before Ryu brought the Korean Series, the Lions previously won the title three times (2002, 2005 and 2006), but it was reported that some home fans were still reluctant to give their support because those victories were brought on by managers who were from other teams, feeling the trophy was achieved by outsiders.

“The Lions had Korean Series success in the past, but it was difficult for the club to get full support from fans because those victories were done by Kim Eung-ryong and Sun, both legends of the Tigers,” said Ha Il-sung, former KBO secretary general who currently works as a commentator for KBS. “But with good performances, I think Ryu had a big influence on the Lions drawing big crowds for their games.”

But while the clubs hope to have good marketing results with franchise stars taking coaching jobs, they also want to strengthen and rebuild their teams for good, competitive results.

Sports pundits said that the franchise star managers can actually enhance the team’s performance because they know how the club’s management works and are familiar with the players and coaching staff, meaning the managers don’t need much time to adjust to the team’s atmosphere and find the right players to implement their tactics.

The success of Ryu and Shin are good examples of benefiting from this advantage, but others warned that franchise star managers could be limited by being pressured to continue the team’s traditional style.

In addition, some pundits pointed out that, especially for managers like Ryu who spent a long time as the assistant coach for his franchise, the player selections for each game could be biased and have less creative tactics.

“Being a manager is different than being a player and assistant coach for your franchise,” Ha said. “If the manager is obsessed with keeping the tradition of the team, the manager could be tied down by the franchise, which I think would bring a negative effect to the team in future.”

Pundits say another advantage of having franchise stars take coaching jobs is that it gives relief and confidence to fans and teams because the stars are proven to be devoted members of their organzations.

For this reason, some suggest that franchise stars would be especially good at helping teams break out of slumps. In fact, it is not rare to see franchise stars begin their managerial careers as interim coaches after their predecessors have been fired or leave a club.

“These franchise star managers strengthen players’ mentality when the team is in danger,” KBS football analyst Hahn June-hea said. “It brings cohesion into the squad to fight back.”

Hahn said that Liverpool’s Kenny Dalglish in last season’s English Premier League is a good example of how franchise managers successfully turn around a team. Liverpool, which at one point sat 12th in the league under Roy Hodgson, finished sixth place in the EPL last season after Dalglish was appointed coach in January.

The Korean version of Dalglish also happened in this season’s K-League with Choi Yong-soo, who is now interim manager of FC Seoul.

Choi, 38, took over Seoul after his predecessor Hwangbo Kwan resigned with poor performance in April. The team was ranked 14th when he took the job, but the former striker finally guided the team to third place, giving them another shot at defending the K-League title.

Choi made his professional debut with Anyang LG Cheetah, now FC Seoul, in 1994. He moved to Japan in 2001 but came back to Seoul in 2006 before starting his coaching career. The former player scored 54 goals in 148 games for Seoul and was named the K-League MVP in 2000 after leading his team to the K-League championship.

When asked how he felt about taking over the club in a difficult situation, Choi answered it actually triggered more of his hunger to win, while boosting his responsibility to give back what he received as a player.

“You need to have deep passion, love and devotion to your team,” Choi said. “I got a lot of appreciation from fans while I played for this club, and I’m working hard to give back that support with good performances.”

Choi also expressed that being a manager of his beloved franchise has given him a similar feeling of staying with his family. But on the other hand, the avid attention from fans added to pressure to get good results.

Pundits, however, claimed that franchise star managers would be less criticized by fans compared to other managers because of their reputations and achievements they made as players.

“The clubs and home fans may overlook the minor mistakes of their franchise coaches because of what they’ve done in the past,” Hahn said. “But if those small mistakes are not corrected quickly, it could eventually backfire on the clubs and fans.”

In fact, for fans and clubs, franchise stars managing clubs bring high expectations as well as a higher level of disappointment if the managers fail to deliver what they want. After all, in professional sports, whether the franchise managers get the full support of fans and get good deals from clubs depends on how good they are at getting results for the franchise.

“When signing a manager, I believe most teams would love to go with their franchise stars if all other conditions are the same between candidates,” MBC baseball commentator Heo Koo-youn said. “But in professional sports, it’s about getting a good result. If the managers can’t give a good result to the club, they are going to be fired. There’s no exception for the franchise managers.”