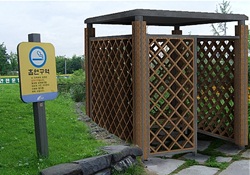 In a direct reversal of his predecessor’s policy, Seoul Mayor Park Won-soon yesterday withdrew a plan to build smoking zones in the city’s nonsmoking parks after he received a letter from an antismoking activist.

The plan to build smoking zones in 15 of the city’s 20 parks was promoted by former Mayor Oh Se-hoon to protect smokers’ rights in public places but has now been officially scrapped, according to Kim Gwang-rae, a manager at the Seoul Metropolitan Government’s Green Seoul Bureau.

“We will absolutely reverse our plan to build the smoking zones in parks,” Kim said.

The author of the letter that sparked yesterday’s announcement, Park Jae-gahb, head of the Tobacco Free World Alliance in Korea and a professor at Seoul National University College of Medicine, applauded the decision.

“I thought it was regressive and ironic for Seoul’s city government, which is trying to make the capital an advanced city, to build a smoking zone in a nonsmoking area,” the activist said. “So I sent the letter to the city government asking for the plan to be withdrawn and saying I wanted to talk to the mayor if he’s available.”

And to the professor’s surprise, the new mayor called and told him that he would act on his request.

“The mayor told his people: ‘Activist Park is known as a missionary for improving people’s health in Korea, and I don’t have any reasons to dissuade him,’ ” the professor explained. “I really appreciate the mayor, and I feel he has a good sense of communication.”

But the announcement was quickly and strongly denounced by the Korea Smokers’ Association, which accused the mayor of ignoring Seoul’s smokers.

Hong Sung-yong, secretary general of the association, said that he would organize in opposition to the city government in light of this policy change.

“The new Seoul mayor totally ignored 10 million smokers in Korea by simply reversing the former mayor’s promise to build smoking zones,” Hong said. “We will launch a campaign soon to encourage smokers not to pay taxes because the new mayor didn’t recognize smokers as citizens in Seoul.”

In a separate move on Friday, the Seoul Metropolitan Government also announced that it would designate 20 percent of outdoor public places in the city as nonsmoking areas by 2014, including all of the city’s bus stops.