Seoul mayor says he opposes FTA because of ISD

Seoul mayor says he opposes FTA because of ISD 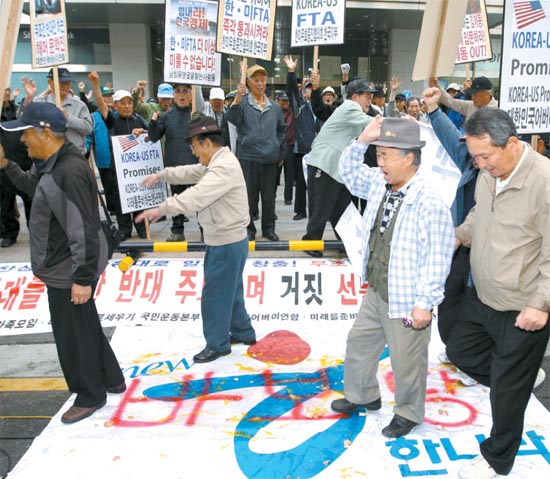 In a rally in front of Grand National Party headquarters in Yeouido, Seoul, members of a conservative civic group called the Korea Parent Federation step on the flag of the GNP yesterday to press for the quick ratification of the Korea-U.S. free trade agreement, calling the ruling party “an idiot” for being unable to pass the FTA despite its large majority in the National Assembly. [YONHAP]


Seoul’s newly elected mayor, Park Won-soon, demanded yesterday that the Korea-U.S. free trade agreement be reconsidered, jumping into the fray of the heated political debate and giving a boost to the increasingly louder leftist opposition to the trade pact.

In a letter to the central government, Park urged the review of the FTA’s provision on investor-state dispute settlements (ISD), which has become the main stumbling block to the pact’s ratification and which liberal activists and politicians have come to refer to as a “toxic clause.”

Park’s decision to join the growing opposition to the FTA, which was inked in 2007 under the liberal Roh Moo-hyun administration, was the first time a mayor of Seoul has taken the significant step of sending a formal letter to the central government to state his position on the issue.

“I support the free trade agreement in general to boost the nation’s competitiveness and expand trade,” Park wrote in the letter. “However, when it comes to the current version of the Korea-U.S. FTA, I think careful consideration and discussion are needed because the agreement concerns the lives of Seoul citizens and the Korean people and is not a matter of political debate or negotiation.”

“If the Korea-U.S. FTA is ratified, local governments in Korea will increasingly be sued by U.S. central and local governments or companies under the ISD provision, which will be a huge financial burden on the Seoul Metropolitan Government if Seoul loses a suit,” Park continued. “Considering the fact that the United States ranks first in the world to file lawsuits through the ISD provision, the upcoming situation is highly worrying.” 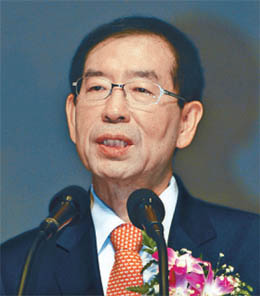 The mayor also called for a new committee that includes local governments to review the ISD provision.

A former attorney, the mayor also demanded measures to protect against possible losses caused by the FTA.

“Under the Korea-U.S. FTA, which cuts tariffs on automobile trade, we expect our tax revenue to drop by 26 billion won [$23 million],” he said. “Furthermore, Seoul’s small-size supermarkets will go down because of the influx of American super-supermarkets into the capital, which could lead to nullifying Korean laws to protect the domestic stores.”

The Ministry of Justice held a briefing yesterday after the mayor’s announcement to refute claims made by Park in his letter and to allay concerns that the ISD provisions would open a flood gate of litigation.

The ministry said that it has already distributed booklets to government officials on possible disputes that could be caused by the ISD provision.

“We published those booklets not to indicate risks of the ISD clause itself but to prevent Korean central and local governments from being sued when attracting investments,” Jeong added.

“It is an international trend to include the [ISD] provision in free trade agreements,” Jeong said. “So we don’t have to worry about the ISD under Korea’s fair policies.”

To prevent lawsuits through the clause, Jeong said the ministry had designated three prosecutors with expertise in international affairs and an attorney to study the provision.