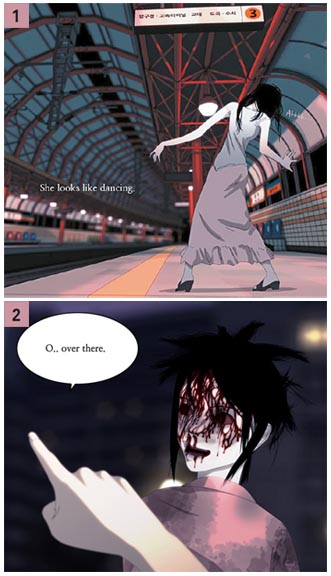 Growing up as a kid whose biggest pleasure was heading to a bookstore to get the latest comic book, Kim Hye-jin, who goes by Zhena on the Web, dedicated most of her time to drawing in hopes of one day creating one herself. But it didn’t take long for her to realize that earning a living by drawing was almost impossible.

Illegal downloads were already rampant and threatening to eat the comic book industry alive. Whenever a new comic came out, it was uploaded in its entirety to the Web and shared by thousands of comic book fans. Comic book publishers were shutting down one after another. Meanwhile, those who did manage to land positions at the few remaining comic book publishers found that life still wasn’t easy.

“Creativity was not allowed. They wanted you to draw marketable comics,” Kim recalled during a recent phone interview. “So I gave up on finding a place [at comic book publishers] and started working as an illustrator.”

But Kim wasn’t able to shake her dream of drawing her own comics. So in 2007, she decided to make her own webtoon, a Web-based, scroll down cartoon.

“There was one corner at Naver where anyone could upload his or her webtoon,” Kim said. “The people who received the most comments from Naver users were given permission to serialize their webtoons.”

That’s how she made her debut as a webtoon artist four years ago.

“The market wasn’t this big back then and webtoons weren’t taken as seriously as they are now,” she said. “They were considered illegitimate or as a job for out-of-work artists.”

But Kim persevered and is now a successful webtoon artist. Her most recent work, “19 Years Old and 21 Years Old,” which was originally published as a two-part comic in December after its popularity exploded on the Web, caught the attention of a French publisher that bought the rights. The French translation of the book is set to come out within the month.

“The French publisher contacted us through a Korean publishing company,” she said. “As far as I know, the French version will be published within the month.”

With beautiful watercolor images, “19 Years Old and 21 Years Old” centers on a 19-year-old boy who wants to enjoy his teenage years before he turns 20 and an insecure 21-year-old girl who thinks of herself as an outcast after failing to get into college because of a car accident. Adding spice to the story, stray cats are portrayed as cute mediums that connect the two lead characters. The book was illustrated by Kim and written by her long-time creative partner Yohan. 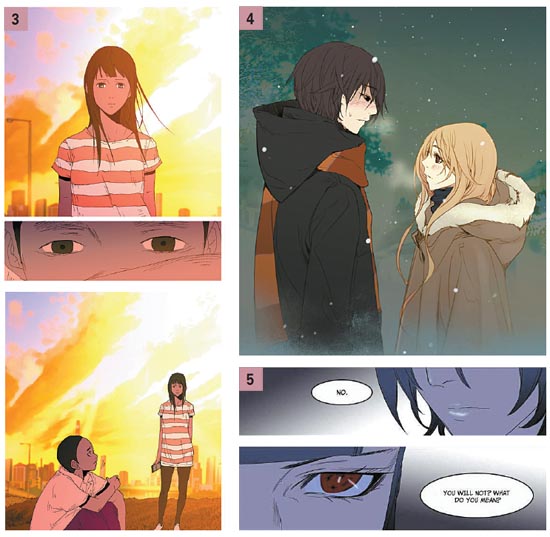 
These days, the market for webtoons is flourishing and webtoons now play a crucial role in the pop culture arena as inspiration for films, drama series and online games. Star webtoon artists who once struggled to make a living are now paid between 3 million won ($2,727) and 5 million won per webtoon episode, which is equivalent to the average monthly paycheck of an office worker.

Korean webtoons have become so popular, in fact, that they have pushed beyond the borders and are reaching fans in other countries.

After the release of “19 Years Old and 21 Years Old,” the horror webtoons “Ok-su Station Ghost” and “Bongcheon-dong Ghost,” both by the artist Horang, captured the attention of fans in and outside of Korea in August when his comics, which had some panels containing Flash animation, were uploaded to Naver.

The webtoons were then translated into English by volunteers who admired the work, which pushed them further into the global spotlight.

“After ‘Bongcheon-dong Ghost’ was introduced by [famed American cartoonist] Scott McCloud on his blog, it spread like wildfire,” said Horang, whose real name is Choi Jong-ho.

Soon afterward, hundreds of video clips of the webtoon were uploaded to the Net. Then, in a bizarre twist of fandom, many non-Korean readers uploaded response videos showing themselves reacting, sometimes with shrieks and screams to the blood and guts on screen, to Choi’s two horror webtoons as they read.

Following on this trend, Naver, the country’s biggest Web portal, which serializes hundreds of webtoons, started providing English subtitles for the webtoons on Sept. 15.

“We saw dozens of comments written in English and realized the webtoons also work in other countries,” said Kim Cheong, an official with Naver’s public relations team. “So we decided to do English translations, though the first ones were a little rough because they were done by users.”

Kim said that Naver could not provide the number of hits Horang’s webtoons have received in order to protect their creator, but said that the English translations of “Ok-su Station Ghost,” and “Bongcheon-dong Ghost” had received about 5,000 comments each. Popular webtoons get an average of 1,000 to 2,000 comments, Kim added.

With the new English translations of his work, Choi became a star overnight.

“After that, I even received a proposal from a French webtoon site to serialize my work,” he said.

Horang is just one of many webtoon artists making their mark abroad.

Another is Ha Il-kwon, whose “Three-Part Transformation: Kim Chang-nam” will soon be made into a film in England.

“I received the offer from a British production company in around 2009,” Ha said. “As it turned out, there was a Korean at the company who had read my webtoon and recommended it be made into a film. Everyone agreed.”

“Three-Part Transformation: Kim Chang-nam” is a fantasy webtoon that portrays the friendship between a robot and her classmate Ho-gu, who is bullied by his peers.

Ha made his debut in 2006 with the webtoon “Sambong Barber Shop.” That and every work he’s made since then have been huge hits, including “The God of Baths,” in which a young man who failed to land a decent job becomes a professional scrubber who exfoliates someone else’s dead skin cells at a public bathhouse. Meanwhile, his other major work “My Heart is Pounding” has been serialized by a Japanese Web portal.

Meanwhile, the enthusiasm for webtoons has translated into artistic freedom for many artists of the genre, including veteran comic artist Hwang Mi-na, 50, who, with a 30-year career in the nation’s comic book industry, is considered a living legend.

She said that before webtoons became popular, it was difficult for young artists “who drew beautiful and interesting stories on the Web for nothing.” But the proliferation of webtoons has encouraged artists to be more creative.

“You always have to cater to the needs of your publishers when working on comic books or magazines, but webtoon publishers are much more liberal,” Hwang said. “Artistic freedom also guarantees quality. Because people are able to draw whatever they like, there is no limit to what webtoons cover, from everyday happenings to epics and fantasy to horror and romance.

“And there are no limits on your audience. Comic books and magazines target a certain age group, but webtoons are different. If an elementary school student understands my work, she becomes one of my readers.”

In the beginning, as webtoons made their first appearance in the late ’90s, the comics were posted by individual artists. Now however, major Web portals, including Naver and Daum, have started to hire webtoon artists on a regular basis as a way to attract visitors to their Web portals. The portals also throw monthly and annual webtoon competitions to generate further interest in their content.

The growing demand for webtoons, and the artists who create them, has also produced a string of management agencies that have sprung up to represent them.

One of these agencies is Nulook Media, which opened in 2009. It represents about a dozen A-list webtoon artists, including Kang Full and Yoon Tae-ho.

The company is responsible for handling everything from copyright issues overseas to developing webtoons into secondary products, such as films, games and more.

“Many such companies have started in recent years,” said Kim Na-yeon, a company spokeswoman. “The beginning was small, but the growth of this segment of the industry is proof that webtoons have a great deal of potential.”