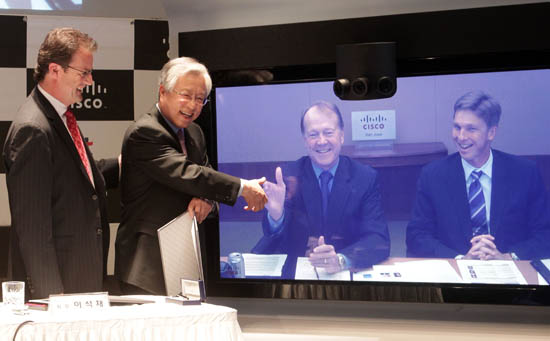 For KT, a public network service provider, it is an opportunity to go global. For Cisco, it is a chance to expand its services to the public.

KCSS was launched with an initial investment of $300 billion, but KT declined to comment on how the respective stakes will be apportioned.

The joint venture will focus on developing the so-called Smart Space business, which involves transforming areas into hubs of digital convergence through the use of information and communications technology.

One of its projects, called Smart Tenant, will rely on KT’s ubiquitous sensor network to provide personal services for individual tenants. Another, Smart Building, aims to make entire structures self-regulating in terms of conserving energy use and providing security.

And the third part of KCSS’s main portfolio, Smart City, aims to connect everything from transportation to security and public utility facilities using a ubiquitous sensor network, and have these managed by a central control tower.

“The Smart Space business will be carried out not only in Korea but also across 14 areas in the Asia-Pacific region,” KT said. “KCSS is expected to be worth about $600 billion. KT aims to reach global sales of 2 trillion won ($1.79 billion) from the company.”

The two partners said this emerging market has the potential to reach 300 trillion won in the future, and as such have targeted annual sales in excess of 100 billion from 2014.

This marks an exciting new departure for KT as it will take more of a hands-on role in designing infrastructure such as shopping malls.

It will flood the place with sensors and decide where cars are parked, where shopping items are placed and even what special offers are made to customers. Meanwhile, the mall will adjust the temperature and lighting automatically based on customer traffic.

“The whole point of Smart Space is to increase the value of a city — providing better education, better healthcare services and so on,” added KT’s Kim Dong-woo.

Through TelePresence, Cisco Chairman John Chambers said, “IT services are becoming as crucial as water and air for future societies.”

Chambers added that the marriage between KT and Cisco will create a strong synergy effect due to the former’s leading status in network technology and Cisco’s role as the world’s No. 1 manufacturer of computer servers.

KCSS, which will be headquartered in Korea, will officially begin operations from January.

Two Smart Space projects are ongoing in Malaysia and the Philippines, KT said.