Once again, committee fails to vote on U.S. FTA

Once again, committee fails to vote on U.S. FTA 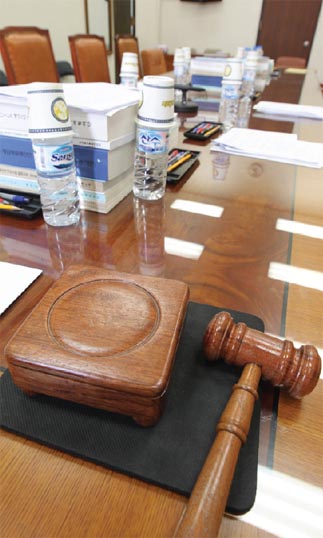 The conference room of the Foreign Affairs, Trade and Unification Committee sits empty after a vote on the Korea-U.S. free trade agreement was delayed again yesterday. [YONHAP]

The Foreign Affairs, Trade and Unification Committee failed once again yesterday to vote on the Korea-U.S. free trade agreement, avoiding a physical showdown after the committee chair said he would make one last effort to talk with the opposition.

“The people expect the ruling and opposition parties to agree to approve the FTA,” said Representative Nam Kyung-pil of the Grand National Party, announcing his decision to postpone a full committee session. “They do not want any more melees at the National Assembly.”

With the ruling GNP’s self-imposed ratification deadline of tomorrow fast approaching, speculations were high yesterday that it would use its large majority to advance the FTA to the full National Assembly.

Since the morning, the budget subcommittee of the Foreign Affairs, Trade and Unification Committee had been deliberating the budget for various ministries in another room, and senior GNP leaders had hinted that a vote on the FTA could come afterward. 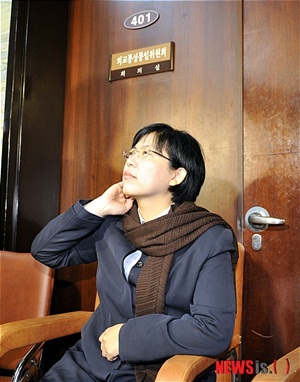 But with deliberations lasting through the evening and leaders of the GNP and the main opposition Democratic Party trading barbs throughout the day, Nam announced that the full committee would not meet, though he said he still intended to bring the FTA up for a vote.

“I do have an intention to hold the FTA vote even if it requires opening a committee meeting in another conference room,” Nam said. “But I still want to give time for one last talk with the opposition parties.”

Tensions had mounted after Representative Hwang Woo-yea, GNP floor leader, said in the morning that the GNP had no choice but to railroad the FTA through.

“After we complete budget deliberations, we must approve it,” Hwang had said yesterday. “We have no option but finding a different conference room and approving it.”

The remarks were a shift from the GNP’s reluctance to mobilize its majority to ratify the FTA in the aftermath of the party’s defeat in the Seoul mayoral by-election. With the GNP facing growing unpopularity, lawmakers have feared that using their majority to approve the trade pact would backfire in next year’s elections.

Outside the National Assembly, the Lee Myung-bak administration launched a full-court press against Seoul Mayor Park Won-soon after he came out against the FTA on Monday.

In a letter to the central government on Monday, Park demanded the reconsideration of the FTA because of what he said would be an influx of foreign lawsuits and supermarkets if the trade pact went into effect. In particular, Park claimed that the FTA’s provision on investor-state dispute settlements (ISD) would make local and central governments vulnerable to foreign lawsuits.

The five ministries said the central government, not local governments, would be sued under the provision.

Park had also argued that the Seoul Metropolitan Government would see its tax revenue decrease if the FTA went into effect. The ministries said that there was already an arrangement made between local governments and the central government to cover the expected losses.

After the central government’s rebuttal, the Seoul Metropolitan Government held an urgent press conference and said the mayor’s letter had not been an announcement of support or opposition to the FTA.

“The petition was to present the Seoul mayor’s opinion on an issue that will have a great impact on the lives of Seoul’s 10 million residents and the city’s administration,” said Ryu Gyeong-gi, the city’s spokesman.