Brooklyn Museum to show controversial film of ants on crucifix

Brooklyn Museum to show controversial film of ants on crucifix 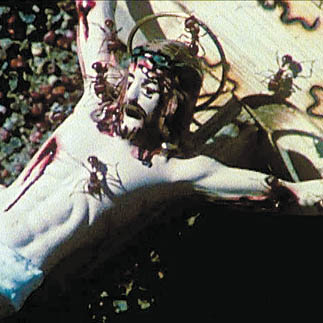 This undated image provided by P.P.O.W. Gallery via the Brooklyn Museum, shows a frame grab from the David Wojnarowicz film, “A Fire In My Belly,” with ants crawling on a crucifix. [AP]

NEW YORK - A major exhibition that includes a film of ants crawling on a crucifix opens next week at the Brooklyn Museum, an institution known for presenting edgy and bold artworks that in the past included a painting of the Virgin Mary that incorporated elephant dung.

“A Fire in My Belly” is a film by the late David Wojnarowicz that was pulled from the National Portrait Gallery in Washington, D.C., when the exhibition was shown there last year. The ant scene angered some in Congress, and the Catholic League called the work sacrilegious.

It is one of more than 100 pieces in “Hide/Seek: Difference and Desire in American Portraiture,” the first major museum exhibition to explore how gender and sexual identity have shaped American art.

Brooklyn Museum Director Arnold Lehman said Wednesday that the museum wanted to present the exhibition “clearly because it’s such an important aspect of American art in the 20th century.”

“We decided to reconstitute it as originally planned by the curators. We haven’t changed the exhibition in any way other than having to replace a handful of works of art that were otherwise promised to other exhibitions or institutions,” he added.

Wojnarowicz’s work explores the subject of AIDS and was created before the artist was diagnosed with the disease, which claimed his life in 1992.

The ant scene fills only 10 seconds of the short film, which was shot on Super8 and later transferred to video.

“My hope is that this will be an extraordinarily important way in which to bring the entire city together to celebrate American art during this last century,” Lehman said. “This is a city that has thrived on the incredible contributions from the gay and lesbian community. This is a state that’s just passed a very progressive legalization of gay marriage.”

Catholic League President Bill Donohue said he wasn’t surprised that the exhibition was coming to the Brooklyn Museum, which he called notoriously anti-Catholic, but he said his group wouldn’t hold protests like it had in Washington.

The League criticized the museum in the past for Chris Ofili’s painting “The Holy Virgin Mary,” which also angered then-Mayor Rudy Giuliani.

Giuliani in 1999 tried to cut public funding from the Brooklyn Museum of Art after it featured the work, which depicts Mary with African features and includes a shellacked clump of elephant dung and magazine cutouts of female genitalia.

After the controversy at the Portrait Gallery, the Smithsonian Institution’s governing board called for changes in how potentially objectionable exhibits are handled. The board said it must be prepared to handle museum disputes and guard freedom of curators in the face of political pressure from Congress or other groups.

The New Museum in New York, which did a retrospective of Wojnarowicz’s work in 1999, said it displayed the film for more than a month just days after it was removed from the Portrait Gallery. It said it received a lot of positive responses from people who came to see it.

Lehman said the only protests his museum received were when it announced the exhibition this year. A Catholic lay group in Pennsylvania, The American Society for the Defense of Tradition, Family and Property, sent several thousand “preprogrammed” e-mails to the museum, he said.