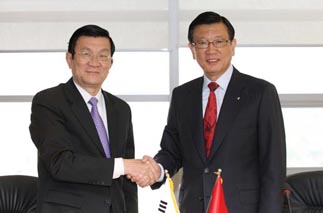 Kumho Asiana Group Chairman Park Sam-koo, right, met Vietnamese President Truong Tan Sang at the group’s headquarters in central Seoul yesterday. This is the fifth time the pair have met since they were first introduced in December 2007, when the group founded the Kumho Asiana-Vietnam Scholarship & Cultural Foundation in the Southeastern Asian country. Some 40 Vietnamese government officials and business leaders also visited the headquarters of the group, which has invested $500 million in Vietnam, including the construction of a radial tire factory in 2008.