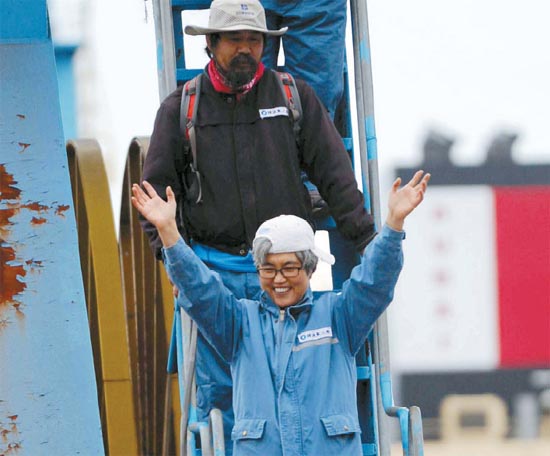 Kim Jin-sook, foreground, walks down in victory yesterday from a crane where she staged a sit-in protest for 309 days after Hanjin’s union accepted a deal with management. [NEWSIS]


Kim Jin-sook, the 50-year-old activist from the Korean Confederation of Trade Unions, ended her record-breaking 309-day protest on top of a shipyard crane in Busan, after Hanjin Heavy Industries’ union accepted in a voice vote a deal with management to rehire all 94 laid-off workers.

In addition to rehiring the workers within a year, each of the 94 will receive 20 million won ($17,621) in compensation.

After a brief ceremony under the crane, Kim was taken to Dong-A University Medical Center under the surveillance of police, who have an arrest warrant against her on charges of interfering with public affairs and breaking into private property. Police said they would launch an investigation into Kim once she gets better.

The opposition Democratic Party, which supported Kim’s sit-in, welcomed the end of her protest.

“We applaud all people - Hanjin managers and union members, Kim, citizens and lawmakers,” Kim Yoo-jung, spokesman for the DP, said. “We demand that Hanjin keep its agreement and not follow the bad example of Ssangyong Motor’s management, which still hasn’t rehired its laid-off workers, two years after they promised they would do it within a year.”

Despite the peaceful ending to Kim’s protest, Hanjin managers expressed serious concerns about the company’s future viability. As of now, Hanjin has no new orders for its Yeongdo Shipyard. Workers there are now just two ships from old orders that will be completed within this month.

Even if Hanjin were to secure a new order this month, the company said that it would take at least 20 months to manufacture the materials. Hanjin recently decided that some of its 400 assembly-line workers would take paid time-off in shifts starting Tuesday.

Hanjin’s management also said that the cost of manufacturing ships at Yeongdo was more expensive than at other shipyards. But the company’s union pointed out that Hanjin has built a new shipyard in the Philippines, where Hanjin has made billions of won over the past three years. The union also cited the 17 billion won in dividends that Hanjin gave to its major shareholders in 2010.

“At this moment, both management and workers should cooperate to get an order,” Jeong Cheol-sang, a Hanjin manager, said. “We will desperately persuade shippers to give us orders by telling them that our shipyard is almost vacant and that it would be easy to meet deadlines.”

But Cha Hae-do, a union leader, said, “The restoration of trust between management and workers should be a priority,” declining to offer ways to address Hanjin’s business woes.

An official at the Korea Employers Federation said that the agreement between Hanjin and its union set a bad precedent for the nation’s businesses.

“If a company is forced to give up on its restructuring because of political pressure, its survival will be threatened as will the livelihoods of its workers,” the official said.