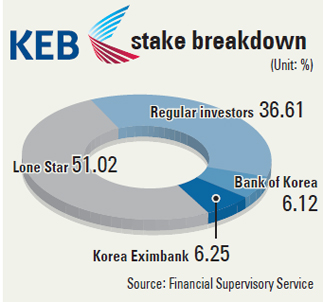 Local financial regulators seem to be dragging their feet over how to phrase their order for U.S. buyout fund Lone Star to sell its controlling stake in Korea Exchange Bank (KEB).

Although the Financial Services Commission (FSC) had been taking steps to make Lone Star forfeit its major shareholder status in the bank until last week, mounting pressure from politicians, academics and the public to order a tougher punitive measure has prompted the delay.

Now the regulator needs to reevaluate how to order the buyout fund to sell its stake, possibly throwing a wrench into the sale of KEB to Hana Financial Group.

On Oct. 31, a piece of paper was distributed to reporters in the press room of the FSC’s headquarters in Yeouido, western Seoul.

Unlike other press releases, the single sheet did not contain key information such as the department that issued it or even the names and phone numbers of officials in charge. In terse language stretching just nine lines long, it informed the reader that “before issuing a stake sale order to Lone Star pursuant to [banking laws], financial authorities have issued a preliminary notice to that effect.”

The memo, which lacked any details, seemed to reflect the FSC’s dilemma over how to phrase that particular order - and appease the public outcry to penalize Lone Star while remaining within an acceptable boundary of legal interpretation.

In early October, Lone Star was confirmed guilty of stock manipulation and stood to lose its status as KEB’s major shareholder under local banking laws.

While the FSC raced through most of the necessary steps for Lone Star to forfeit ownership, the expected final step of ordering it to sell all but 10 percent of its 51.02 percent stake was postponed. And some observers have said the move will not be made this week.

The FSC now has two options: issue a straightforward sell order or attach conditions to such an order as a way of penalizing Lone Star.

Although most FSC officials that have spoken to the Korea JoongAng Daily since the October ruling favored the former, public forces are pressuring the watchdog to attach restrictive conditions and penalize the U.S. buyout fund vilified for its excessive profit-taking.

“The current deal between Hana Financial and Lone Star to acquire KEB is void,” said opposition Democratic Party leader Sohn Hak-kyu late last month. “If the FSC will not issue a punitive order to Lone Star to sell its stake with conditions attached, there will be a hearing.”

“It’s not to late to issue a forcible order to sell [Lone Star’s] stake after deciding whether Lone Star is a non financial capital or not,” tweeted ruling Grand National Party leader Hong Joon-pyo last Monday. “At the very least, [Lone Star] must be stopped from receiving a management premium.”

Hana Financial Group agreed to pay Lone Star 4.4 trillion won for its controlling stake, which on the stock market was worth 2.56 trillion won as of last Friday’s closing.

Law professors and groups including the progressive Lawyers for a Democratic Society have publicly called for the FSC to instruct the fund to dispose of its KEB shares by selling them freely on the stock market at market-determined prices, citing precedents under securities law.

The Constitutional Court even recently agreed to hear a petition from KEB minority investors claiming damages from falling stock prices due to the FSC’s failure to determine whether Lone Star is a nonfinancial capital.

The minority investors cited evidence gathered by KEB’s employee union that Lone Star is a nonfinancial capital, as it owned more than 2 trillion won in assets, including a golf course operator in Japan in 2005.

However, there is no clear legal basis for the FSC to penalize Lone Star, and freely selling Lone Star’s 260 million KEB shares on the stock market within the legally-prescribed six months could be difficult.

The lack of a clear course of action has led the FSC to tread lightly. “The process has been quick until now because the circumstances clearly proved Lone Star’s ineligibility as a major shareholder of a bank and there was nothing to review,” an FSC official said. “However, the stake sale order is not as easy because there is a lot to review.”

There have already been two failed attempts to sell KEB since Lone Star acquired the bank in 2003.