The yellow-clad women of yogurt

The yellow-clad women of yogurt 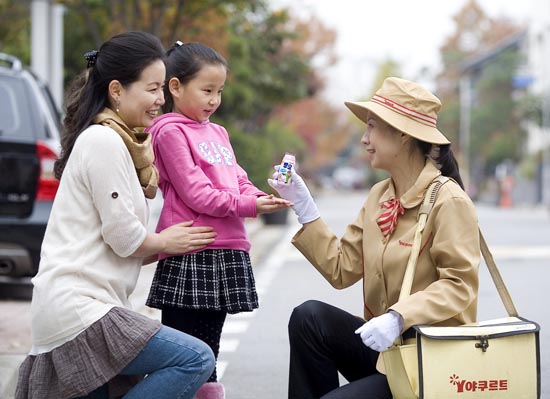 Getting an icy cold beverage from ubiquitous vending machines or convenient stores is easy to do these days, but it wasn’t back in 1970s and ’80s, when refrigerators were considered a token of wealth. Korea Yakult’s solution was hiring saleswomen for its newly released yogurt-based drinks to deliver the products while they were cold and fresh direct from the saleswomen’s insulated cooler bags.

Apart from delivering the products, these saleswomen, who are clad in yellow uniforms, often dubbed Yakult ajumma, also had an important mission: promoting the yogurt-based drinks to most Koreans who didn’t know much about lactobacillus. When Yakult was first released, there were few people who were willing to pay for the expensive drink which contained the then-unheard of lactobacillus, wrongly considered a harmful type of bacterium by many Koreans.

In addition to that, an 80-milliliter bottle of Yakult cost 25 won ($.02) when it was first rolled out. Back then, Yakult was even labeled a luxurious good by the government because a one-way bus fare was about 12 won at the time.

Yakult ajumma sold just one type of drink in the beginning but they now offer about 27 types of different beverages. They also deliver beverages door to door.

The company said the average age of a Yakult ajumma is 44.3 years old and their monthly income is about 1.7 million won. They walk around 5 kilometers (3.1 miles) on average per day.