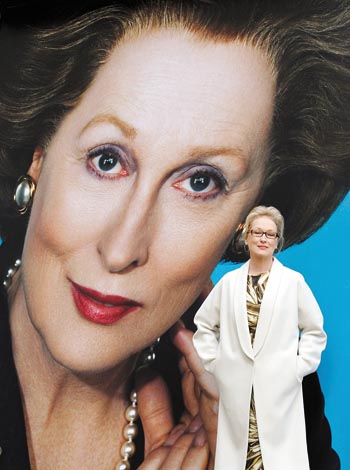 Actress Meryl Streep poses for photographers after unveiling a poster for her new film “The Iron Lady” opposite the Houses of Parliament in central London on November 14. The film is based on the life of former British Prime Minister Margaret Thatcher. [REUTERS]

LONDON - Meryl Streep showed her credentials for her role as former British Prime Minister Margaret Thatcher when the launch of the poster for her new biopic “The Iron Lady” went awry in London on Monday.

The Oscar-winning actress was supposed to pull on a length of rope to unveil the poster on a mobile billboard atop a truck opposite the Houses of Parliament - but she broke the rope clean off.

Streep, however, in Thatcher-like style was unperturbed. With the help of director Phyllida Lloyd she tore off a giant sheet to reveal an image of herself as the ex-premier against a blue backdrop.

Earlier the 62-year-old actress had joked that Londoners would be “sick” of seeing her face, complete with Thatcher’s bouffant hairdo, pearls and bright red lipstick.

“I’m happy to be here with my brilliant director Phyllida Lloyd and just stop and give you a preview of what you’ll be so sick of looking at all over London soon enough - which is my face in the poster,” she said.

“We’re all coming back in January when the movie opens and there will be more then.” “Mamma Mia” director Lloyd said it had been a major feat for the actress to play Thatcher, Britain’s only female prime minister and longest continuously serving premier of the 20th century.

“I think it’s one of the bigger challenges that she’s undertaken,” Lloyd said.

“To take on a whole life is a huge challenge for any actor and of course she viewed coming over here to England, I think, with trepidation - could she pull it off? But I think people are going to be amazed by her.” Lloyd added that the film was not political, despite taking on the subject of a famously divisive leader who at the head of a Conservative government from 1979-1990 oversaw a transformation of the British economy but crushed the trade unions.

“It’s not a conventional biopic in any way,” Lloyd said.