CPI set to include farmers’ spending

CPI set to include farmers’ spending 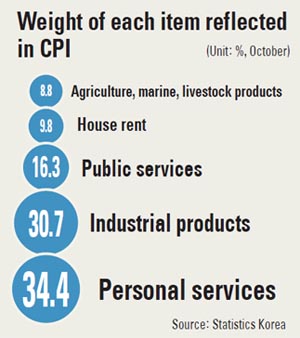 Rural households will find their spending habits factored into the country’s consumer price index for the first time, part of a systematic overhaul that critics are blasting as a desperate attempt by the government to conceal rampant inflation.

At present, the monthly CPI is calculated based on household spending in 37 urban areas, excluding single-person households. But officials from Statistics Korea and the Ministry of Strategy and Finance said yesterday this will be enlarged to other parts of the country including rural regions.

Statistics Korea reflects the average spending of each household on certain products designated by the agency to come up with the value of the product before it calculates the consumer price figures.

“By taking into account the consumer spending patterns of all households in the country, instead of just those living in towns or cities, the CPI will be more representative,” said a government official. “Expanding the consumer group target to measure spending is a global trend. It is not restricted just to Korea.”

Additionally, the government will trim the number of items on the list from 489 to 480.

The latest move comes as part of its broader plan to overhaul the CPI and introduce a new system later this month, which will be used to calculate this month’s CPI.

In August, Finance Minister Bahk Jae-wan told reporters the government would soon move to reflect changed consumption trends in the country in line with social and technological shifts.

For example, public phone charges are not as relevant as they were before the advent of cell phones and smartphones, while landline phone usage and consumption of electronic dictionaries has also dropped off significantly. Bahk said these should be dropped from the gauge and replaced by more common items such as smartphone telecom fees and makgeolli (Korean rice beer).

The last time the calculation system was changed was back in 2005.

Bahk’s comments come as Korea’s consumer prices are surging due to the rising cost of international raw materials and unusually heavy summer rains in July and August.

The CPI rose above the government’s target of 4 percent before falling to 3.9 percent last month for the first time this year, mainly due to stabilized vegetable prices amid harvesting season.

Fighting inflation, however, remains a key priority for the government as prices are expected to rise significantly before the end of this year.

According to Statistics Korea, the growth in the country’s consumer prices must dip below 2 percent for both November and December if authorities are to meet their inflation target of 4 percent. The average rate of growth from January to October was 4.4 percent.

With the government frustrated in its attempts to rein in inflation, criticisms are mounting that the CPI overhaul is merely a pretext to try and meet its inflation target.

Statistics Korea said earlier that the new system will remove gold prices as a yardstick because gold trading has not been promoted much in recent years. As such a measure would help flatten out the gauge before year’s end, this has fueled the conspiracy theories.

An official from the Bank of Korea downplayed such speculation.

“Changing the system is something that happens every five years or so,” he said, adding that “we are trying to take out the price of gold because this has surged lately, causing actual trading to drop off significantly.”

Gold prices have boomed in recent months because of market turmoil spurred by the debt crisis in the European Union region as investors increasingly seek out what they consider to be safe havens.

“Gold prices do not have a strong bearing on the CPI, which is why we are planning on taking them out and using other items instead that better reflect people’s spending habits,” the BOK official said.