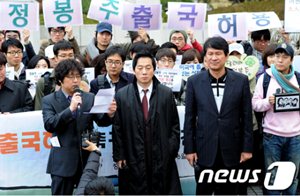 The four men who became famous because of their online talk show “Naneun Ggomsuda,” or “I’m a Petty-Minded Creep,” held a press conference yesterday in front of the Supreme Court in southern Seoul, demanding the court renew the expired passport of one of their members.

The anti-Lee Myung-bak administration talk show has gained popularity among the younger generation recently, amid high unemployment and social inequality.

They put out their talk show as a podcast and have recorded the highest download rate for the political section in the world. Roughly 200 fans came to the press conference as the men argued that authorities intentionally moved to deny the renewal of Chung’s passport.

Currently, Chung is standing trial at the Supreme Court after being convicted of spreading false rumors that President Lee was involved in the BBK stock price manipulation scandal during the 2007 presidential election.

A string of prestigious U.S. universities, such as Harvard, have invited the group to attend lectures, they said, but the Supreme Court has rejected renewing Chung’s passport.

“We are supposed to attend lectures and seminars at U.S. universities, but we can’t go because of the expired passport,” Chung said.

“If the reason why the government rejected the renewal is because of [our show], it is such a shameful and dirty response.”

Chung added that the ongoing trial should not be a problem because the Supreme Court allowed him in 2010 to renew his passport for a year. He also said that there were many politicians in Korea who have been traveling overseas even though they have ongoing trials.