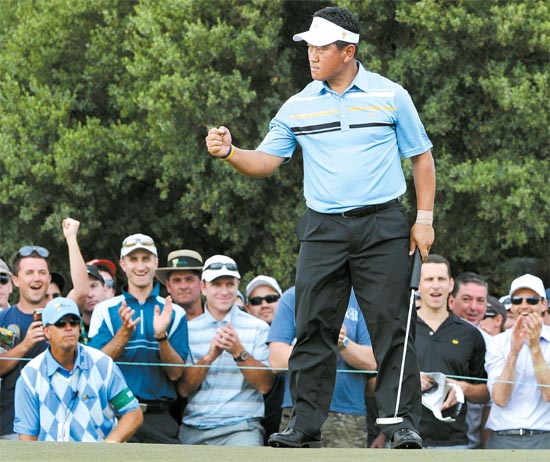 Korea’s K.J. Choi celebrates sinking the winning putt as he and international teammate Adam Scott of Australia defeated Tiger Woods and Steve Stricker of the U.S. in their match at the Presidents Cup tournament at the Royal Melbourne golf course yesterday. [AFP/YONHAP]


MELBOURNE, Australia - Adam Scott and K.J. Choi were relentless yesterday at Royal Melbourne in dishing out the worst loss for Tiger Woods in any format of match play.

The international pair won 7 and 6, tying the record for biggest margin of victory in Presidents Cup history. And Woods and Stricker, undefeated two years ago, turned out to be the only weak link for the Americans.

The U.S. won three matches handily, and rallied to halve two other matches to build a 4-2 lead after the opening session. 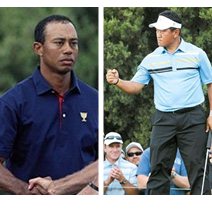 Woods and Stricker, winners of their first six matches together, now have lost their last two - 6 and 5 last year in the Ryder Cup to Lee Westwood and Luke Donald, and 7 and 6 to Scott and Choi. What looked particularly bad about this one is the American tandem didn’t win a hole and was the only team that failed to make a single birdie.

The only other match that went 12 holes since the Presidents Cup began in 1994 was when David Frost beat Kenny Perry by the same score in singles in 1996.

“Unfortunately, they got off to a quick start and we just couldn’t keep up,’’ Woods said. “We kept falling to the wrong side of these slopes. The golf course is so difficult, it’s hard to make up shots.’’

Two of the six matches went the distance. Geoff Ogilvy and Masters champion Charl Schwartzel lost a late 2-up lead and had to settle for a halve against Bill Haas and Nick Watney. Dustin Johnson and Matt Kuchar rallied from 3 down with six holes to play and won the last two holes with pars to earn an unlikely halve.

It was the third straight time in the Presidents Cup that the Americans won the opening session. They are 6-1-1 in this competition, the only loss coming 13 years ago at Royal Melbourne.

The Americans won the other three matches in a rout, led by the opening match of Bubba Watson and Webb Simpson. They were 7 under through 16 holes in a 4-and-2 win over Ernie Els and Ryo Ishikawa.

Phil Mickelson and Jim Furyk, together for the first time since Brookline in the 1999 Ryder Cup, won 4 and 3 over Retief Goosen and Robert Allenby. Hunter Mahan and David Toms drilled the Korean duo of Y.E. Yang and K.T. Kim, 6 and 5.

Woods and former caddie Steve Williams exchanged a firm, businesslike handshake on the opening hole but otherwise kept their distance.

That was about all the drama in what might be the final chapter of this bitter split between player and caddie.

Williams now works for Scott, who was crisp off the tee and into the firm greens. He rolled in a 25-foot birdie putt to win the 11th hole, then hit an approach into 8 feet as Choi made the birdie to close out the match.

Scott and Choi never came close to a bogey and were 4 under through 12 holes. Woods and Stricker were 3 over.

“It seemed like we were just a little bit off,’’ Stricker said after his first competition since Sept. 25 at the Tour Championship.

“It seemed like I put him in the rough by a foot or so. If you’re in the rough here, trying to hit to some of these greens is pretty difficult.’’

Scott called it a “very pleasing victory,’’ more to do with being home in Australia than anything to do with his caddie.

“A good win, because they were a tough team last time, took a lot of points off us,’’ Scott said. “So it was pleasing to get one up there.’’