K-League playoffs kick off this weekend

K-League playoffs kick off this weekend 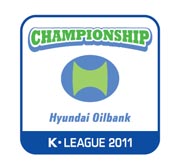 Putting a big disappointment from the Korean national football team behind them, football fans can now turn their eyes to the Korean Professional Football League (K-League) to enjoy the sport as the six-team playoff kicks off this weekend.

The winner of these two matches will then square off against each other on Wednesday to face the Pohang Steelers, who was the runner-up in this regular season. The winner of that match will advance to the home-and-away championship series which begins on Nov. 30, with regular season champion Jeonbuk Hyundai Motors.

Both Seoul and Suwon marked a 76.7 winning percentage at home this season, but the history of the first round of the playoffs shows there is no clear home advantage. Since this playoff round format was introduced in 2007, home and away teams have garnered four wins each in their previous eight games.

Defending champion Seoul has the league’s top scorer Dejan Damjanovic. The 30-year-old striker netted 23 goals this season, but may be tired after playing for the Montenegro national team in the Euro 2012 playoff against the Czech Republic on Tuesday.

“Dejan’s condition will be a big factor for this match,” KBS commentator Hahn June-hea said to Ilgan Sports, the JoongAng Ilbo’s daily sports newspaper, yesterday. “In fact, he’s been jinxed in his previous playoffs. He hasn’t played well.”

Colombian forward Mauricio Molina can empower Seoul’s attack. He was the league’s seventh in goals scored (10) and third in assists (12). Their opponent Ulsan has the best defense in the league, allowing only 29 goals in 30 matches in the regular season.

Three Korean international members - goalkeeper Kim Young-kwang and defenders Kwak Tae-hwi and Lee Jae-sung - are key members of Ulsan’s defense. They all traveled to the Middle East to face the United Arab Emirates and Lebanon recently, so how well they have recovered will be critical.

“Seoul should be aware of Ulsan’s set pieces,” Kim Ho, former national team coach, said. “It’s going to be an interesting match with many goals.”

While most experts are expecting the Seoul-Ulsan match to be a tight match, they are saying Suwon can stop Busan.

Suwon lost Macedonian striker Stevica Ristic after he was suspended for a brawl that occurred during the AFC Champions League semifinal against Al Saad last month. But forward Ha Tae-goon and winger Yeom Ki-hun, who is the league’s second best in assists, will lead the team’s attack.