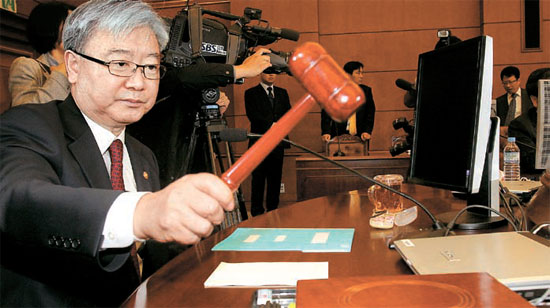 In a fiercely-debated decision, the Financial Services Commission (FSC) and its Chairman Kim Seok-dong refused to bow to public pressure to penalize Lone Star, opting to give a simple order “pursuant to the rule of law instead of sentiment.”

Lone Star is a lightning rod for controversy in Korea because it is perceived as a foreign company only interested in milking its investments for profits. Civic groups claim Lone Star has already profited from 2.9 trillion won ($1.56 billion) in dividend payouts from KEB, which exceeds its initial investment in 2003. In October, the holding company it established to acquire KEB was found guilty of stock manipulation and fined 25 billion won.

Detractors of the FSC’s move including politicians, KEB’s union and civic groups, which erupted in protest, renewing their calls for the FSC to review whether Lone Star is a nonfinancial investor ineligible to own KEB in the first place, and deny the buyout fund a management premium of roughly 2 trillion won.

The FSC’s decision brings KEB’s sell-off closer than ever after two aborted attempts in the past.

Despite public calls opposing the move, the FSC ordered Lone Star to sell off all but 10 of its 51.02 percent majority stake in KEB yesterday without setting any conditions that would penalize it in the process.

The FSC said its order must be carried out within six months, the maximum period in Korean banking law given to a major shareholder of a commercial bank forfeiting its controlling stake due to guilt in financial crimes.

“The FSC decided to refrain from specifying the method of the stake sale by comprehensively considering the purpose of the regulations reviewing the eligibility [of a bank owner] as well as both domestic and overseas precedents,” said Lee Suk-joon, FSC standing commissioner at a joint press conference by the FSC and the financial watchdog the Financial Supervisory Service (FSS).

“The FSC [also] decided to order the stake sale to be carried out within six months by considering the amount of [some 265 million] shares to be sold as well as past precedents.”

The decision, based on the most straightforward interpretation of current banking laws, was widely expected, as FSC Chairman Kim said that he “[does] not intend to benefit Lone Star, nor [does he] intend to intentionally put Lone Star at a disadvantage.”

“Decisions concerning foreign investors must be made fairly, according to the rule of law rather than sentiment,” said Kim, answering lawmakers’ questions while appearing before a parliamentary committee on Thursday.

Concerning the claims that Lone Star is a nonfinancial investor with more than 2 trillion won in assets and is therefore ineligible to own a bank under Korean law, regulators said the FSS is investigating the veracity of the claims.

However, according to regulatory officials, the FSC decided to go ahead with the stake sale order because even if Lone Star is found to be a nonfinancial investor, the options open to regulators wouldn’t have been very different.

Under banking laws, the FSC could have ordered the buyout fund to sell all but 4 percent of its 51.02 percent stake, rather than keeping 10 percent.

Protests redoubled at the news, and some 2,000 KEB employees camped outside the FSC building in Yeouido, western Seoul, to denounce the decision. The bank’s union said it would go on a general strike “within this month” to protest the order.

The KEB employee stock ownership association also filed an administrative lawsuit against the FSS demanding it reveal the results of its investigation into whether Lone Star is nonfinancial investor, including the value of golf courses allegedly owned by a Lone Star subsidiary in Japan.

Politicians such as the Democratic Party’s Ooh Che-chang threatened hearings and promised to block legislation related to the FSC on Thursday should regulators issue a simple stake order.

Meanwhile, the legally-prescribed maximum deadline of six months for the sale is expected to weaken the bargaining position of Hana Financial Group should it attempt to renegotiate with Lone Star to bring KEB’s sale price down, as was widely reported.