Leggy delicacy will keep you squirming

Leggy delicacy will keep you squirming 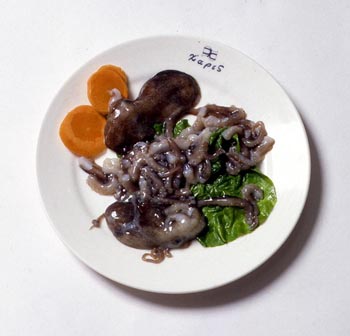 Sure, director Park Chan-wook’s “Old Boy” is remembered for winning the Grand Prix at the Cannes Film Festival and is praised for changing the face of Korean cinema forever. But there are also many people who remember the film for the particularly grotesque scene in which the main character, Oh Dae-su, stuffs a whole octopus into his mouth, legs waving, and eats it.

Though their method of consumption may not as dramatic as Oh’s, Koreans have long enjoyed live octopus, or sannakji (“san” means “live” while “nakji” is Korean for “octopus”), as a delicacy.

To make the dish, a live octopus is cut into small pieces with a light sprinkling of sesame oil and sesame seeds. Before being sliced up, the octopus is put into a mixture of salt and fresh water, which rids the animal of toxins.

The dish is best served fresh and on the spot, while the octopus is still squirming on the plate.

Although the sight of a moving octopus might seem unappetizing, the taste is relatively mild, almost bland without the sesame oil.

For more flavor, the dish can also be served with a light marinade of gochujang, or hot red pepper sauce.

The hardcore way to consume sannakji is to eat it whole, Oh Dae-su style.

But after several reported incidences in which people died eating whole live octopus because the legs blocked their airway, there are now few restaurants that serve the dish this way.

Octopus is high in protein and essential amino acids as well as being low in fat, and eating the creature raw is considered to be good for stamina and weight control.

The dish was originally popular among Korean fishermen, providing a lot of protein and nutrients when meat was not readily available.