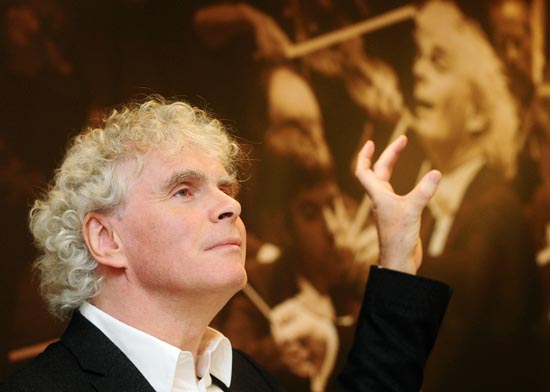 Simon Rattle, conductor of the Berlin Philharmonic Orchestra, speaks at a press conference on Tuesday in Seoul. The orchestra performed two concerts here three years after its last performance. [YONHAP]


When Simon Rattle, a celebrated English conductor, was finished with the hour-long Bruckner Symphony No. 9 in D minor with the Berlin Philharmonic Orchestra at the Sejong Center for the Performing Arts last Wednesday, he stepped down from the podium to shake hands with each of the soloists on stage.

It was hardly a conventional way for the conductor to express his appreciation for the soloists, given that the majority of conductors usually motion to them to stand up and accept the audience’s applause.

His leadership method forms one pillar of his reputation. He has brought admirable new perspectives and activities to the world’s top orchestra since he took the helm in 1999.

His decision to invite underprivileged children and the disabled to the orchestra’s rehearsal for an hour before the two concerts in Seoul - one on Tuesday at the Seoul Arts Center, at which Mahler’s Symphony No. 9 in D major was played, and the other on Wednesday at Sejong - is also groundbreaking.

Rattle’s goal is to have as many people as possible listen to the music of the Berlin Philharmonic Orchestra, which he compared to an “expensive machine” at a press conference on Tuesday at a hotel in southern Seoul.

“We need to give everybody the opportunity to hear the orchestra because it can actually change their lives,” said the philosophical conductor, who often paused to stare into the distance before answering questions from reporters.

In line with its humanitarian goals, the orchestra launched an unprecedented initiative to stream live concerts in high definition through its “Digital Concert Hall” program in 2008.

The Liverpool-born conductor, who studied at the Royal Academy of Music in London, began his professional career as a percussionist. He made his conducting debut in 1980 and has since served a handful of orchestras. He first conducted the Berlin Philharmonic in 1987, in a performance of Mahler’s Symphony No. 6. Twelve years later he was appointed as the orchestra’s principal conductor.

The last time he performed in Seoul with the orchestra, which was previously led by Herbert von Karajan and Claudio Abbado, was in 2008.

That was three years after he had made a promise to include Seoul in the list of cities the orchestra would visit while on tour in Asia every three years.

“One of the things that has struck us in Korea is the depth of the response,” he said. “It’s not the silence, but the depth of silence.

“The feeling is that this is a country where our music has meant something very profound for a very long time. And this is something that can’t be manufactured.”