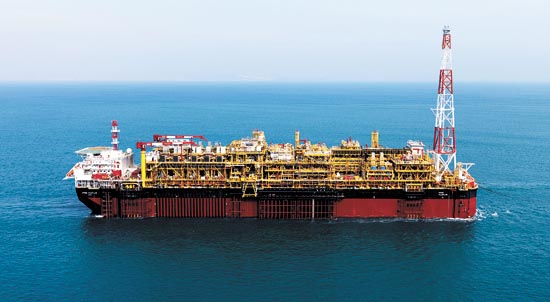 
Korean shipbuilders are shifting their focus onto subsea plants that help oil companies find new sources of natural resources like oil and gas. They not only rely on making ships that carry resources discovered onshore, but the shipbuilders build offshore facilities for exploring resources buried in the seabed as well.

The subsea plant market refers to establishing facilities that can reach 3,600 meters (11,811 feet) to 12,000 meters under water to explore oil or gas wells, far deeper than the current offshore facilities.

The big three shipbuilders in Korea have seen orders for offshore facilities increase, including drillships, oil drilling facilities, underwater pipelines and offshore platforms, accounting for bigger shares of their business.

The No. 1 Hyundai Heavy Industries said its offshore facility orders accounted for 57 percent of the total orders so far this year. The company received a total of $10.4 billion worth of orders for offshore facilities, exceeding $7.8 billion for traditional ships.

Hyundai Heavy even created a new task force team last October for deep water resource development in order to expand its business portfolio into finding new sources of oil and natural gas from the oceans. The task force team has officially begun its operation early this year.

“Based on accumulated know-how of building offshore facilities, Hyundai is preparing to expand into the subsea resource development business by running a TF team,” Park Jun-soo at the company said.

“The big three shipbuilders could reach their target orders this year, despite the stagnant shipping market, because of increasing orders for facilities related to underwater resource development,” Park said.

Last week, Daewoo Shipbuilding said it won an order from Brazil to build two vessels for underwater resource development. The vessels will help dig underwater pipes 2,500 meters from sea level to extract oil and gas in the waters off of Brazil.

DSME completed the world’s largest floating production and storage offloading (FPSO) facility in January. The FPSO was delivered to Angola and successfully completed its first oil drilling, the company said. An FPSO unit is a floating vessel designed to receive hydrocarbons produced underwater, process them into oil and store them until the oil can be off-loaded onto a tanker.

The company also received a drillship order in May, which can also work 3,600 meters below the water surface. A drillship is a vessel made for exploratory offshore drilling of new oil or gas wells in deep water. The reason why shipbuilders have shifted their focus onto exploring deep water is that the amount of oil and natural gas found inland has decreased by 5 to 7 percent every year, according to the industry.

“There are 10 FPSO construction projects going on around the world, and Korean shipbuilders have won all of the orders,” said Koo Bon-sung from the Korea Shipbuilders’ Association.

The Ministry of Knowledge Economy said the subsea market is forecast to grow to $180 billion by 2020. The ministry plans to develop the subsea sector in cooperation with the big three shipbuilders.