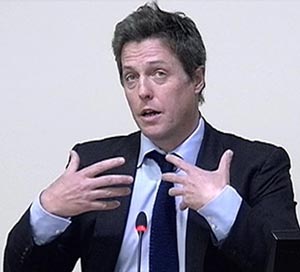 LONDON - Actor Hugh Grant said Monday that he believes his phone was hacked by Britain’s Mail on Sunday tabloid - the first time he has implicated a newspaper not owned by Rupert Murdoch in the wrongdoing.

Grant told an inquiry into media ethics that a 2007 story about his romantic life could only have been obtained through eavesdropping on his voice mails.

He said he could not think of any other way the newspaper could have obtained the story alleging that his romance with Jemima Khan was on the rocks because of his conversations with a “plummy voiced” woman the paper identified as a film studio executive.

Grant said there was no such woman, but he did receive voice messages from the assistant of a producer friend.

“She would leave charming, joking messages ... and she had a voice that can only be described as plummy.’’

Grant sued the newspaper for libel and won.

Challenged as to whether he was speculating about the source of the story, Grant acknowledged that he didn’t have any hard proof.

“Speculation? O.K. But ... I’d love to hear what the Daily Mail or the Sunday Mail’s explanation of what that source was if it wasn’t phone hacking.”

Prime Minister David Cameron set up the inquiry into media ethics in the wake of a still-evolving scandal over phone hacking in Britain. Murdoch shut down the News of the World tabloid in July after evidence emerged that it had routinely eavesdropped on the voice mails of public figures, celebrities and even crime victims in its search for scoops.