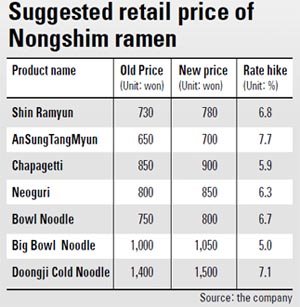 Nongshim, the nation’s No.1 instant noodle maker, will raise the prices of its ramen products by an average 6.2 percent, the company announced yesterday.

The price hike will affect all of its popular brands, including Shin Ramyun, Neoguri, Chapagetti black bean noodle and Big Bowl cup noodle, to reflect rising production costs, it added.

This is the first hike issued by the manufacturer in four years.

“Due to soaring prices of crops and agricultural products, we will increase the prices of instant noodles by 50 won on average from tomorrow,” it said. 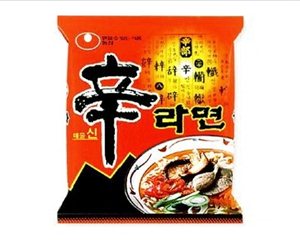 The suggested retail price of Nongshim’s Shin Ramyun will be raised to 780 won ($0.67) from 750 won a pack, while the price of AnSungTangMyun will go up to 700 won and Chapagetti black bean noodle 900 won, according to Nongshim.

Neoguri, another popular instant noodle made by the nation’s second largest-food maker after CJ Cheiljedang, will be sold at 850 won per pack.

The company said the new rates would only be applied to products released from today, a move that could send Korean housewives on large shopping sprees this weekend to hoard the cheaper version of the product.

“I’ll stop by a discount store near my office on the way home from work to get hold of the cheaper noodles before they vanish,” said Lee Yoon-soo, a 30-year old company worker.

Nongshim, which controls the lion’s share of Korea’s instant noodle market, lowered some of its products by an average of 4.6 percent last year in line with the Seoul government’s efforts to tame inflation.

The company said today’s price hikes were inevitable, however, because of a sharp rise in the cost of raw materials.

The move comes despite worries that raising the prices of this staple food could put upward pressure on inflation in Asia’s fourth-largest economy, which has been working overtime to try and rein in consumer prices.

Korea’s consumer price index has shown signs of stabilizing in recent months, registering an on-year gain of 3.9 percent in October, down from 4.3 percent in September.

While some industry sources predict that Nongshim’s decision will spark a series of similar price hikes by other noodle makers, Samyang Food Co., Ottogi and Korea Yakult Co said yesterday that they do not plan to follow suit this year. But they left the door open on how they would proceed in early 2012.