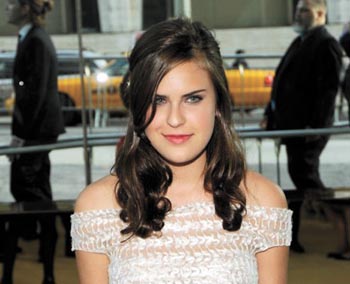 PARIS - Tallulah Willis, the youngest daughter of actors Bruce Willis and Demi Moore, stepped out as the teen star of the Debutantes Ball in Paris, alongside Andie MacDowell’s youngest, Margaret Qualley.

Held each year at the Crillon Hotel on Paris’ Place de la Concorde, the ball is a highlight of Europe’s high-society calendar that updates a custom stretching back to the royal courts of France and England.

Clad in sumptuous designer gowns, Qualley and Willis, both just 17, were among the youngest of the 23 girls making their debut on Saturday, daughters of a global elite of actors, business leaders and aristocrats. Both of the girls’ elder sisters made their debuts at the ball in past years.

Willis and the other fathers opened the ball, leading their daughters in a waltz before the music switched to modern fare including Duran Duran, in honor of the band’s bass-player John Taylor who was one of the fathers present.

Tallulah stepped out in a black silk Lanvin dress, its bustier adorned with crystal and rhinestones, created specially by designer Alber Elbaz, who she described as “a very dear friend.”

Margaret, a trained dancer and model, was draped in a gem-encrusted, chocolate brown Elie Saab gown. Andie MacDowell told AFP her daughter, who spent part of the summer training with Paris opera dancers, hoped to move to the French capital next year to start modelling there.

“Everything starts here, fashion-wise,” said the actress, whose own career took off while she was modeling in Paris in the late 1970s. I fit in better in Paris - they didn’t know what to do with me in New York,” she said.

Asked how she felt to be sending her youngest daughter out into the world, MacDowell admitted it was “a little stressful, and a little sad.”

When the dancing is done, the debutantes traditionally trade gowns for a pair of jeans and head out clubbing, with their cavaliers as de facto chaperones.