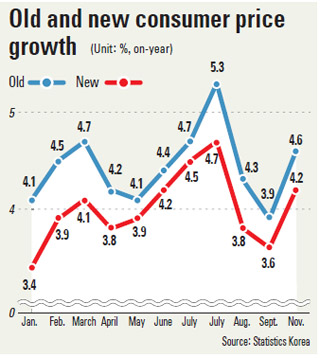 Lee Myung-ja, a 55-year-old housewife, was shocked at the 240,000 won grocery bill when she went grocery shopping recently for ingredients to make kimchi at a large discount store near her house.

“I remember spending a lot less last year to make kimchi for my family of four,” she said, adding that she had only loaded her cart with cabbage, radish, green onion, chili powder, garlic and pickled shrimp.

“The price of goods just seems to be surging, which makes it difficult for an ordinary household like ours to manage,” she said.

In line with rising consumer prices across the nation, the cost of ingredients to make the nation’s favorite side dish jumped 3.7 percent last month in annualized terms, according to Statistics Korea yesterday.

Yet this still beats the average growth of consumer prices, which rose 4.2 percent over the same period to exceed the government’s target of 4 percent, the data showed. In October, consumer prices grew 3.6 percent on-year.

The latest increases come despite a newly launched system to measure the consumer price index (CPI), which critics have labeled a desperate attempt to lower the inflation index amid growing public concern over rampant inflation.

Concerns are mounting among government officials as the price hikes come after the new CPI measurement system, which excludes gold prices and scores of other items, was applied. The government removed the price of gold rings, which have a large impact on the final tally, citing a decrease in gold trade.

This week, the Ministry of Strategy and Finance unveiled its new system that includes 43 new items such as smartphone fees and makgeolli (Korean rice beer), while excluding 21 products ranging from gold rings to camcorders.

The system is regularly amended every five years to better gauge inflation by reflecting the latest spending habits.

Under the old measurement system, consumer price growth for last month was higher at 4.6 percent.

Calculated using the new system, consumer prices dropped 0.5 percent to average 4 percent from January to November, keeping the government in contention to meet its annual target.