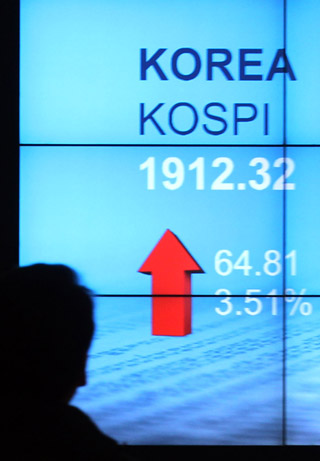 An electronic board at a building in Jung District, central Seoul, shows the Kospi’s close at above 1,900 yesterday. [YONHAP]

The local market surged on relatively good news about the European financial crisis, and the surge was so sharp that the fifth “sidecar” of the year was activated.

A sidecar is a mechanism that halts all trade for five minutes when the market drops or rises by more than 5 percent for over a minute.

Korean investors are familiar with sidecars, but they usually are activated when stocks plunge.

The U.S. Federal Reserve, the European Central Bank and four other central banks lowered the borrowing rate for U.S. dollars, which sparked expectations that the liquidity squeeze suffered by European and other financial institutions will be lessened.

The sharp rise continued for over a minute. All trading was halted for 5 minutes.

This was the fifth time that the sidecar was activated on the local stock market this year.

As Korean stocks fell due to worries about Greek default risks and its impact across Europe, the sidecar was activated three times in August and once in October.

However, this is the first time that the sidecar was activated because the market surged upward since January 2009.

Meanwhile, the Kospi broke the 1,900 barrier for the first time in almost two weeks.

The market opened at 1,909.31, owing to a 4 percent surge on the New York Stock Exchange on Wednesday.

The New York stock market rose as central banks in major countries reached an agreement to provide liquidity and the People’s Bank of China lowered its cash reserve ratio.

“The market surged as an unexpected level of global cooperation has been made,” said Lee Seon-yeop, an analyst at Shinhan Investment.

“Along with the Chinese central bank’s announcement to cut its reserve rate, major central banks around the world agreed to collaborate, and expectations increased in the market.”

This will help troubled European countries finance the greenback at lower costs.

“In 2009, the sidecar was activated due to a sharp increase in spot trading,” Lee said. “However, futures showed stronger signs of rising yesterday because the market rebounded from expectations of a further plunge to a surprising rally. The latest global collaboration has given significant momentum, so there is an expectation that the rally will continue for a while.”