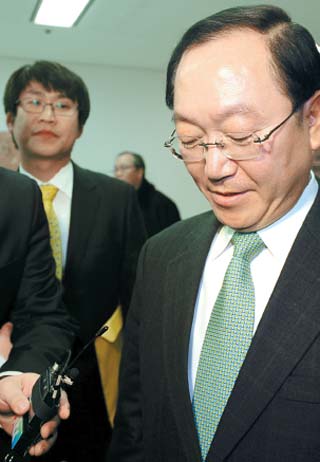 Representative Choi Ku-sik, right, of the ruling Grand National Party, walks out of his office yesterday to a press conference to respond to allegations that his aide orchestrated the massive cyberattack that paralyzed the National Election Commission’s Web site on by-election day on Oct. 26. [NEWSIS]

The massive by-election-day cyberattack that crippled the National Election Commission’s Web site, creating mass confusion for voters who were trying to get to the polls, was allegedly orchestrated by an aide to Grand National Party Representative Choi Ku-sik.

A 27-year-old staffer, only identified by his surname, Gong, was arrested by the National Police Agency after its cyberterrorism unit found evidence that he had directed three IT workers to carry out the attack. The three workers were also arrested, and police have already sought detention warrants for them for further questioning.

Although the police did not disclose the name of the lawmaker whom the suspect worked for, law enforcement and political sources said he was an aide to Representative Choi Ku-sik, who is head of the GNP’s public affairs office and served as the campaign communications director for the GNP’s mayoral nominee, former Representative Na Kyung-won.

The shocking news reverberated through the nation’s political circles and, if true, would be an unprecedented attempt to influence voter turnout by figures so close to the nation’s government, with potentially dire consequences for the implicated party, already beleaguered by a string of election losses and the reinvigoration of the nation’s liberals ahead of next year’s elections.

Gong has denied the charges, according to the sources. The three other suspects, however, have told police that Gong had ordered them to “stop young voters from finding their polling stations.” Analysts had predicted in the run-up to the by-elections, which included the crucial race for the Seoul mayoralty, that a low turnout would advantage the ruling party’s candidates.

The election watchdog’s Web site, which provides information on poll locations, was paralyzed for more than two hours because of the DDoS attacks, shutting it down from 6:15 a.m. to 8:32 a.m. Media reports at the time said young office workers had experienced inconveniences in confirming the location of their polling stations before they had to go to work.

Representative Choi yesterday held a press conference to deny speculations that he was behind the attack.

“Some said the suspect is my aide, but he worked as my chauffeur for one year and three months and not in my office,” Choi said. “If the investigation reveals that I’m part of this crime, I will immediately resign from my seat.”

“I feel like I have been struck by lightning under a clear sky,” Choi added. “I was told that my chauffeur had claimed his innocence during the police probe. I trust him and I will cooperate fully with the investigation.”

Gong had worked as Choi’s driver since September last year and turned in his resignation on Nov. 25.

According to the police, Gong asked a hometown friend on the eve of the Oct. 26 by-elections to conduct the attack. His friend, in turn, asked two of his coworkers for help. The three reportedly used 200 zombie personal computers the next day to create a traffic spike that eventually paralyzed the election commission’s Web site.

Police said they were also suspected of carrying out a similar attack on the Web site of Park Won-soon, the liberal mayoral candidate who would go on to win the race.

The opposition Democratic Party said it was dismayed by the news. “Once again, the GNP was proven to be the incubator of foul play and corruption,” Representative Lee Yong-sup, DP spokesman, said in a statement.

DP lawmakers on the Public Administration and Security Committee of the National Assembly held a press conference to allege that the GNP’s campaign headquarters was involved in the crime. “We believe this cyberterror was systemically organized by the GNP and Na’s camp,” Representative Baek Won-woo said. “The police must not treat it as an individual’s crime. It should be clearly revealed who inside the GNP planned and ordered it.”

Representative Lee Seok-hyun said a National Assembly probe was needed to get to the bottom of the unprecedented event. He also demanded the GNP to be dissolved for attempting to incapacitate the election commission and to sink a political opponent.

The National Election Commission issued a statement deploring the news as well. “The motive and masterminds of the crime must be revealed thoroughly before the people,” calling the cyberattack not only an obstruction of public duty but a threat to fair elections and a grave challenge to the country’s democracy.

Demanding heavy punishments, the commission added that it would upgrade its security for next year’s legislative and presidential elections.