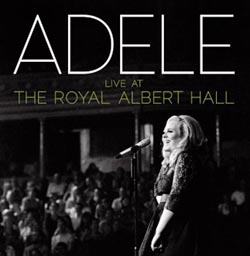 Acts who have covered Adele’s “Rolling In the Deep” range from John Legend to Linkin Park to the cast of “Glee.” None hold a candle to the crowd singing along to the jam at the Royal Albert Hall.

“Live at the Royal Albert Hall,” the British singer’s live DVD and CD, was taped on Sept. 22. Adele, who recently had throat surgery, had a respiratory infection at the time. Though her voice sounds strained during some tracks, she’s still epic throughout the 17-song set. She’s best - and funniest - during “Take It All,” the first song she recorded for her best-selling album “21,” when her relationship was in trouble. “He left me a couple weeks after I played him this song,” she said, laughing.

In addition to beautifully belting emotional tunes like “Someone Like You” and “Set Fire to the Rain,” Adele’s new DVD also showcases the singer telling jokes, pleasing the crowd like a grade-A comedian.

The DVD also offers some behind-the-scenes moments on the day of the live performance, showing Adele making tea with rollers in her hair. “If [I] throw up before a show, it’s a brilliant show,” she says.