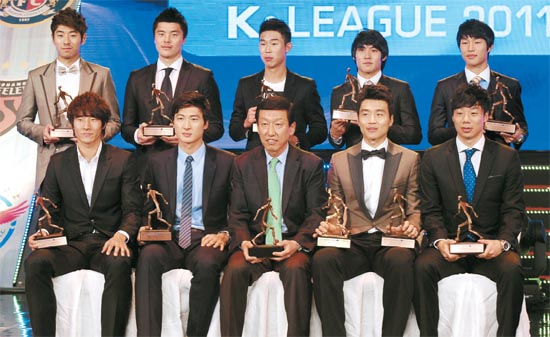 
Jeonbuk Hyundai Motors FC striker Lee Dong-gook was named the most valuable player in the Korea Professional Football League (K-League) yesterday, capturing the top award for the second time in his career, the first coming in 2009.

Lee played a pivotal role for Jeonbuk as the team claimed the K-League regular season title and championship series. The 32-year-old was the league’s second-best scorer with 16 goals and first in assists with 15.

The striker has already had success in the Asian Football Confederation Champions League where he won the golden boot with nine goals and was the tournament MVP despite Jeonbuk finishing runner-up behind Qatar’s Al Saad.

“I’m really happy and thankful that I won this big award again after 2009,” Lee said. “I will consider this award as if it has been given to my family-like teammates who fought for the team’s victories.”

But the MVP award was not the only honor that Lee experienced yesterday. With the assist title, the former Middlesbrough FC and Werder Bremen footballer also won ‘FAN’tastic player, an award given by fans who voted on the K-League Web between Nov. 21 and Dec. 4.

“I was one of the players that had many antifans,” Lee said. “It’s more meaningful for me since this award is from fans. I will perform better next year.”

Four other MVP candidates were also included in the Best 11. Seoul midfielder Ha Dae-sung and Ulsan goalkeeper Kim Young-kwang were also on the list.

While Lee enjoyed good times at the award ceremony, it was a case of deja vu for Jeonbuk coach Choi Kang-hee as he took the best coach of season award for the second time since 2009.

The 52-year-old coach’s win at the awards was more emphatic than Lee’s, bagging 107 of 115 votes from the reporters. Ulsan coach Kim Ho-kon, who led the No. 6 seeded team to reach the championship series for the first time in K-League history, and Pohang Steelers FC coach Hwang Sun-hong, who led the runner-up in the regular season, were the other candidates.

Choi, who has guided Jeonbuk since 2005, said that the league must develop further in order to help Korean football, and Jeobuk will help to pave the way.

The K-League was rocked by a match-fixing scandal in May and has been putting forth an effort to clean up its image.

“The K-League brought more than 3 million fans this year, but we had dark moments,” Choi said. “Jeonbuk and other K-League clubs will work hard to show better performance next year when the league celebrates 30 years.”