Madonna to perform at Super Bowl

Madonna to perform at Super Bowl 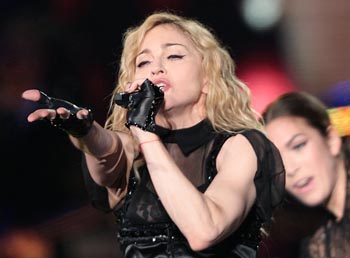 NEW YORK - Madonna will be taking the stage on U.S. football’s biggest night, the Super Bowl.

The National Football League and NBC announced Sunday night that the Grammy Award-winning singer will highlight the Feb. 5 show, which is the most-watched musical event of the year. More than 162 million in the U.S. tuned in to see The Black Eyed Peas’ performance with Slash and Usher last February.

Madonna, a Rock & Roll Hall of Fame inductee who has sold more than 300 million records, will join such acts as Bruce Springsteen & The E Street Band, Prince, U2, Paul McCartney, The Who and the Rolling Stones to perform during recent Super Bowls. She will collaborate with a team from Cirque du Soleil, choreographer Jamie King and artists from Moment Factory.