Pantech founder to step down soon

Pantech founder to step down soon 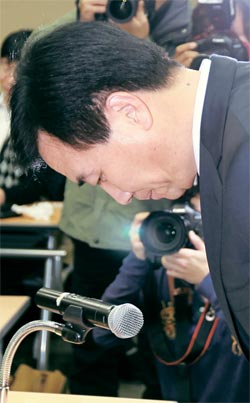 Citing exhaustion, Pantech founder Park Byeong-yeop will resign from his post as vice chairman of the nation’s third-largest handset maker at the end of the year, he said at a press conference yesterday.

“I have had a tough time over the last five years, and I want to take a break,” Park said. He made it clear that he was under no pressure from creditors to leave the company.

Park would be eligible to receive a 10 percent stock option if he maintains his position for an additional three months, but he said that experiencing a five-year-long workout program had left him drained.

Recalling the trials and tribulations associated with the workout from its onset, he said, “When we first faced difficulties, one of our banks decided to leave us. That was not the right course of action.”

He went on to extend his “sincerest thanks” to Korea Development Bank, Nonghyup and Hana Bank for providing the company with so much support.

Park made it clear that the current workout program is expected to end later this month, as planned.

“We have achieved as much as we can,” he said. “The creditors will decide whether they can conclude the workout program or not.”

After the debt restructuring program, Pantech’s largest shareholder, KDB, is going to look for prospective buyers of the company, he said.

“As far as I know, I can still exercise my preferred purchase right after the creditors select a preferred bidder to negotiate with and finalize the acquisition terms,” Park said.

He said he will surrender his stock option given by the creditors but will retain the purchase right. He declined to say whether he intends to return to the company at a later date.