The government announced yesterday dramatic changes in its real estate policies to try to perk up the stagnant market.

The biggest change is an elimination next year of the weighted home sales tax for multiple home owners, which was adopted by the previous administration seven years ago to quash speculation and cool the real estate market. The tax made it more expensive for owners of more than one property to sell them.

The Ministry of Land, Transport and Maritime Affairs and the Ministry of Strategy and Finance laid out a comprehensive set of policies yesterday to help revive the market. It was the sixth announcement of changes in real estate-related policies this year. The changes will take effect when the National Assembly approves them.

The real estate market and construction industry are stagnant and the situation is expected to remain bleak due to the possibility of an economic slowdown. Investment in construction has declined for six consecutive quarters since the second quarter of 2010. The amount of jeonse, or key money deposit, for rental housing stabilized a bit since September after skyrocketing for nearly one year. Jeonse prices rose because people decided to lease houses rather than buy because they expected home prices to decline further. 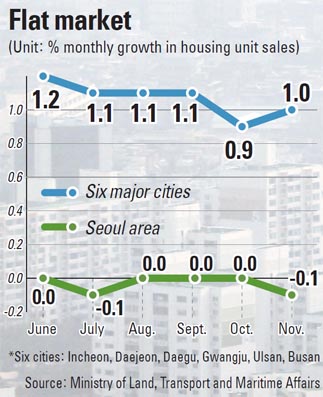 The other measures the government announced included:

The government will eliminate an antispeculation zoning designation for three southern Seoul districts, Seocho, Gangnam and Songpa. The zoning was designed to prevent sales of apartments in buildings or complexes selected for urban renewal. The change will allow homeowners to sell their apartments despite the planned urban renewal.

The ministry said 19,000 owners of apartments subject to redevelopment will benefit. In addition, 22,000 people residing in areas where urban renewal is being considered are expected to benefit.

The ministry will also suspend a levy on large capital gains from urban housing renewal for two years to speed up such projects as a number of them have hit the wall due to the slow real estate market.

“The real estate market, especially in the Seoul metropolitan area, is still inactive,” Minister of Land, Transport and Maritime Affairs Kwon Do-yup said at a press meeting at the Government Complex in Gwacheon, Gyeonggi, yesterday. “With declining construction-related investment and the lack of new orders, real estate businesses are facing hardship and this may further weaken the housing supply.”

The government also hopes that these measures will encourage housing sales and ease demand for jeonse.

The weighted tax on capital gains from home sales by multiple home owners was introduced in 2005 by the Roh Moo-hyun administration, which was determined to fight speculation during a fast-growing real estate bubble. Under the weighted tax, people owning three or more homes have to pay 60 percent capital gains tax on home sales, while those owning two houses pay 50 percent. The regulations are now believed to be keeping the market stagnant. After the change, those owners will have to pay basic capital gains tax rates of between 6 percent and 35 percent.

According to a tax accountant at Kookmin Bank, the new measure will reduce tax on capital gains by 50 percent to 60 percent. If a homeowner with three houses sells a 1 billion won ($888,000) house which he purchased for 200 million won, he would have to pay 198 million won in sales tax instead of the current 438 million won.

The change, however, does not apply to those who own homes in the three southern districts. In addition, debt-to-income and loan-to-value restrictions for mortgage loans will continue for people buying homes in those districts.

The government also announced policies to help low-income households purchase homes. The ministry said it will provide low-interest rate loans for first home buyers through the national housing fund. The interest rate will be lowered by 0.5 percentage points to 4.2 percent while qualification for the loan will be eased from a total annual household income of 40 million won to 50 million won. The government will offer a total of 1 trillion won in such loans and 15,000 families are expected to benefit.

However, analysts said the new measures will not have much impact in the short term.

“Considering that it is a slow season and economic uncertainties remain, it is less likely to revive the real estate market immediately,” said Yim Pyeong-cheol, an analyst at Real Estate 114, an Internet real estate information site.