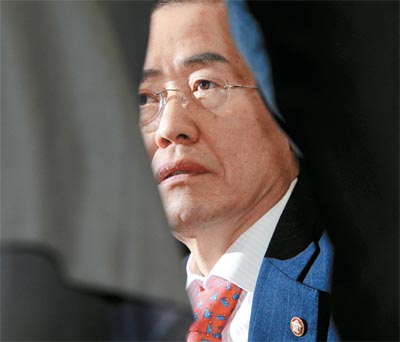 Three senior leaders of the Grand National Party yesterday announced their decision to quit the leadership, dealing a crippling blow to the crumbling Hong Joon-pyo chairmanship and further endangering the existence of the conservative ruling party.

Representatives Yoo Seong-min, Won Hee-ryong and Nam Kyung-pil held press conferences one after another yesterday morning and made public their decision to step down from the GNP Supreme Council, urging other senior leaders to follow suit. Their moves reflected the growing desperation of GNP lawmakers ahead of April’s legislative elections.

But the embattled Hong refused to resign yesterday.

Representative Yoo, a loyalist of former GNP chairwoman Park Geun-hye, was the first to announce his decision to leave the Supreme Council.

“As a member of the leadership, I am stepping down for having failed to rescue the party from its crisis,” Yoo said.

Yoo said the GNP’s defeat in the Oct. 26 Seoul mayoral by-election first prompted him to think about leaving the Supreme Council. But the decisive moment came with the recent arrest of a GNP lawmaker’s aide over an alleged cyberattack on the National Election Commission on the by-election day.

“I feel responsible for the party’s lethargic handling of the situation,” he said, “and I have decided to leave the leadership.”

In his press conference, Representative Won urged the Supreme Council members to “dismantle the GNP without reservation and play a role to open a path for a new political movement.”

Nam criticized the GNP and the Lee Myung-bak administration for failing to heed the warnings of the people. He also urged other members of the leadership to give up their positions.

“Maintaining the current order cannot be an answer,” Nam said.

The Supreme Council, the highest decision-making body of the GNP, has nine members. The party’s floor leader and chief policy maker are members of the council in addition to five elected members including the chair. The chair also appoints two members.

At a press conference yesterday, Hong said he understood the sincere and loyal advice of the three Supreme Council members. But he refused to accept their resignations and declined to step down.

Hong also argued that now is the time for the ruling party to focus on National Assembly affairs, including next year’s budget and other bills linked to people’s livelihoods.

“The GNP will have a dramatic overhaul after the budget approval,” Hong said.

“I have a plan to shut down and reopen the ruling party,” Hong said. “I have a road map but it is not the time to talk about the specifics.”

It remains to be seen if former chairwoman Park will take the reins from Hong because the party’s long-time presidential front-runner has kept her distance from the internal discord. She and her loyalists have been reluctant to accept the idea of Park playing the role of the party’s savior because that could be risky ahead of the presidential election in 12 months.

Park rescued the GNP once before. In 2003 and 2004, the party found itself in crisis over an illegal political funding scandal surrounding its presidential candidate, Lee Hoi-chang, and facing a backlash from its impeachment of then-President Roh Moo-hyun. In early 2004, Park took over and instituted ruthless reform measures, moving the party headquarters to a makeshift tent and leading a campaign that ended in a landslide victory for the GNP in the 2008 legislative elections.

GNP lawmakers held a caucus yesterday afternoon, originally to talk about a tax-cut plan. Instead, an intense discussion on the fate of the leadership took place. Hong gave opening remarks, asking the lawmakers to make a decision on his fate and left the meeting.

It was an echo of last week’s GNP meeting. On Nov. 29, the battered GNP chairman survived internal pressure to step aside after lawmakers and party chapter heads agreed to keep him after nearly 10 hours of discussion. At the time, Hong offered his resignation if party members so desired and eventually won a mandate to push forward reform.

Hong recalled that the party had experienced a similar situation in April 2007 after a by-election defeat. He said he wanted to focus on budget review and reform the candidate nomination system to recruit fresh blood and relaunch the party in mid-February.

The plan will be modeled after the 1996 launch of the New Korea Party, the predecessor of the GNP, Hong said.

He said he intended to revise the party constitution to allow presidential candidates to play more active roles in the leadership. Currently, a candidate is barred from holding the party’s chairmanship.