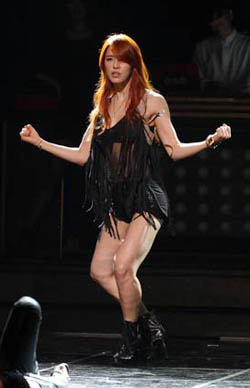 Kahi, leader of girl group After School, and Kim Ji-soo from “Super Star K” will join a star-studded cast in the upcoming teenage drama “Dream High 2,” according to a statement released by the drama.

A representative for the drama said Kahi will play the role of a teacher and not a student, and said the staff is working to coordinate scheduling. “Currently, we are trying to work out a filming time table to work around Kahi’s hectic work schedule.”

Kim Ji-soo’s role in “Dream High 2” will mark his acting debut. Kim will play the part of a boy who is crazy about guitars. The singer contestant from “Super Star K” has been actively pursuing his musical career in radio and television.

On Dec.6, an official press conference for the drama took place and lead characters were announced to be actress Kang So-ra, Hyo Lyn from Sistar, Ji-Yeon from T-ara and Jeong Jin-woon from 2AM. The first broadcast of “Dream High 2” will be aired on Jan. 30.