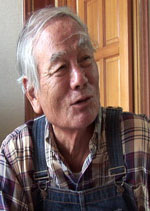 Hoarding artist Paek Chun-tae’s 40-year career painting cinema billboards came to an early end in the 2000s, but his work is now featured in an exhibition that will run through the end of this month.

Like many other hoarding artists, he lost his job in the 2000s as many old-style movie theaters for whom he worked were driven out by multiplex cinemas. Hand-painted cinema billboards, likewise, were replaced by large, computer-printed posters.

Born in Hwanghae Province in what is now North Korea in 1944, Paek moved to South Korea with his parents at age 6. He spent his childhood in Incheon as a boy dreaming of becoming an artist. Unable to enter an art university because of his parents’ disapproval and financial difficulties, he chose to work as a cinema hoarding painter.

“Everyone was hit by difficult economic times after the Korean War (1950-53). It was such a hard time that artists could barely earn a living. I jumped into the cinema job because I wanted to earn money, more than anything,” the 67-year-old said in an interview with Yonhap News Agency.

His early years as a hoarding artist, however, were difficult both economically and mentally, since only a few people recognized him as an artist.

“Most people call people like me ganpan-jaeng-i,” he said, referring to a disrespectful name for those engaged in professions related to making billboards. “Movie theaters were in difficulty, too, because people would go to see movies only about twice a year - on Chuseok [fall harvest celebration] and Lunar New Year’s Day,” he recalled.

Then, the massive influx of foreign movies into the local market in the 1970s and 1980s pushed up demand for hoarding artists, helping improve social recognition of the profession and treatment of the artists.

“I came to have more and more work to do. In my peak years, I hand painted almost all billboards for movie theaters in Seoul’s downtown areas,” he said, proudly.

In that way, he painted several-thousand cinema billboards until the old-style Danseongsa Theater in Seoul, his last workplace, turned into a multiplex theater in 2005.

“Before, cinema hoardings were all different and characteristic because they were hand painted by artists,” Paek said. “But now, computers churn out all the same images. I can’t feel anything - liveliness, humanity or romance - from them.”

Paek and three other hoarding artists on Thursday opened an exhibition of photos and pictures of their billboard works for such films as “The Bridge on the River Kwai” (1957), “Madam Aema” (1982) and “The General’s Son” (1990) at the Chungmu Art Hall gallery in central Seoul.

A total of 14 items, in addition to videos of interviews with the artists, are on display in the exhibition, “Films of Forgotten Artists,” which is scheduled to run through Dec. 31.

Asked about how he feels about the exhibition, Paek said he is both happy and sad, since it would be his first and last chance to hold that type of exhibition.

“I just hope people coming to see this exhibition think of their good old days,” he said.