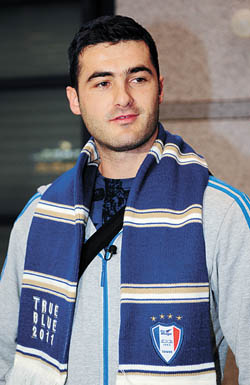 Montenegrin striker Dzenan Radoncic, who signed a three-year contract with Suwon Samsung Bluewings FC after moving from Seongnam Ilhwa Chunma FC, recently announced that he will obtain Korean citizenship and attempt to play on the national team.

Pundits say although it is too early to judge whether Radoncic will become a Taeguk Warrior, the 192-centimeter (6-foot-4-inch) tall striker could be a formidable presence in the box as he is strong in the air.

Radoncic is planning to obtain Korean citizenship through special naturalization, which is exclusively given to those expected to promote national benefit with their talents. Unlike general naturalization, it does not require applicants to take written exams, but the screening process of the government is very thorough and rigorous.

The Montenegrin striker will first have to go through a review by the legal and ethic subcommittee of the Korean Olympic Committee and, if approved, then be examined by the Ministry of Justice. The final result is expected to come out in the next few months.

Radoncic first came to Korea in 2004 after signing with Incheon United FC and was briefly loaned to Japanese club Ventforet Kofu in 2007. During his eight seasons in the K-League, Radoncic has netted 52 goals and tallied 19 assists in 195 games.


Q. Why did you decide to obtain Korean citizenship?

A. I was very happy while playing football in Korea. This is the country that taught me “real football.” I want to wrap up my football life here.

Critics have said you want to increase your own value by putting a national team career on your resume. What do you think?

I’m not trying to get citizenship because I want to play on the national team. Being a Korean is my first priority.

If you become a Korean citizen, are you confident that you will make the national team?

I am confident. I know I will give it everything I’ve got. If the new coach for Korea selects me, I will put my best effort forward to survive on the national team. I am in good physical shape. Even if I don’t score, I will create chances for my teammates and throw the opponents’ defense into confusion.

Some pundits claim you disrupt team play and have often been inconsistent and unfocused. How do you respond to these criticisms?

Honestly, when I first played for Incheon, I lacked lot of things. I was young and didn’t know the culture and environment back then. But now I’ve spent a lot of time in Korea and have gained experience. With Seongnam, I learned the importance of team play while winning the AFC Champions League.

Is there a specific player on the national team that you want to play with?

It must be Park Chu-young. He is very smart and has great technique with speed. I played with Park in the 2006 K-League All-Star Game and I scored five goals with good chemistry with Park. Whether it’s at club or national level, I want to play alongside Park again.

Are you confident you could adjust well on the national team?

There are many current members on the team who I have played with before. They will help me and I will help them if there is anything I can do for them. They all congratulated me when I announced my plan. There was a lot of support for me.

Will you live in Korea even after you retire?

Honestly, I haven’t thought that far ahead. But what’s important is that right now I’m enjoying life in Korea.

What do you want to do after you retire?

I want to be a coach or an agent. I can judge if players can succeed in Korea.