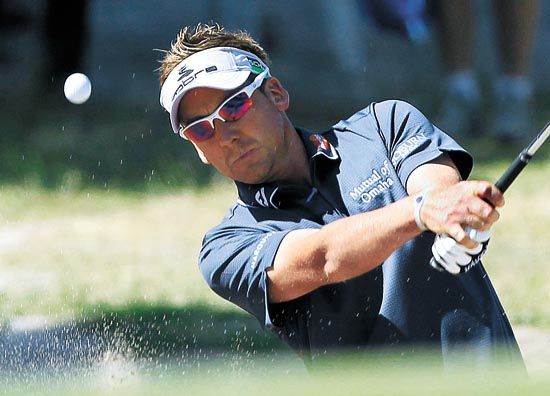 Ian Poulter of Britain plays out of a bunker on the first hole during the first round of the Australian Masters at the Victoria Golf Club in Melbourne yesterday. [REUTERS/YONHAP]


MELBOURNE, Australia - Ian Poulter made good on his goal to upstage fellow Briton Luke Donald at the Australian Masters, shooting a sparkling six-under-par 65 to take a one-shot lead after the first round yesterday.

Both players soaked up the morning sunshine in sublime conditions at Melbourne’s Victoria Golf Club, but it was the smartly dressed Poulter turning the most heads as he notched seven birdies to edge early pace-setter Ashley Hall of Australia.

World No. 1 Donald rolled in only two birdies and struggled to build momentum in his first professional tournament Down Under, but displayed enough of his trademark control to finish with a blemish-free 69, four strokes behind.

Resplendent in a pair of tartan trousers and a matching violet sweater, Poulter delighted in the short sandbelt course that places a premium on tactics and smart iron-play.

“It’s always nice to go out and play well after playing a golf course that you have never seen before until the day before,” the 35-year-old told reporters.

“It’s refreshing because a number of the courses we play week in week out it just seems like you are taking the driver head-cover off on every single par-four or par-five, and the odd par-three. So it’s nice not to do that.”

Poulter, on a mission Down Under to lift his 28th ranking at the end of an inconsistent year, three-putted for his lone bogey on the par-four 11th, his second hole, but clicked into gear with a 30-foot birdie putt on the par-four 15th.

That sparked a run of five birdies in six holes, highlighted by a sublime bunker shot on the par-four first that cleared another sand-trap before settling within two feet of the pin.

Donald, seeking tips from the Melbourne sandbelt courses for his own golf architecture ambitions, struggled on the greens and rued his failure to make hay while the sun shone.

“Obviously a perfect day for scoring. I hit it quite well on the back nine, but on my front nine I just made no putts,” said the Englishman, who finishes the season as the first player to win both the U.S. and European tour money crowns in the same year.

Hall, a burly 28-year-old with only two minor tournament wins in the local tour to his credit, briefly threatened to steal both the Britons’ thunder with a barnstorming 29 on his first nine holes, but stumbled with a bogey and a double bogey in his last five.

Holder Stuart Appleby shrugged off a twinge in his lower back to card a one-under 70, while former U.S. Open champion Geoff Ogilvy was a further shot adrift after a scratchy 71.