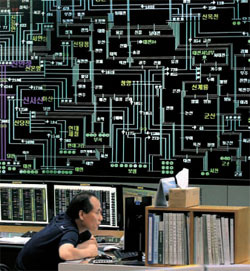 A nuclear reactor located in Gori, Busan, was shut down yesterday morning due to what appeared to be problems in an electric generator connected to the reactor, Korea Hydro and Nuclear Power Co. said yesterday.

The shutdown occurred only 12 hours after another reactor in Uljin, North Gyeongsang, stopped at 8:05 p.m. on Tuesday due to the stoppage of water pumps, adding concerns over insufficient electricity supply in the country through the winter. By industry standards, the two reactors are considered quite old as they began operating in the late 1980s.

The Unit-3 reactor with a capacity of 950,000 kilowatts at the Kori Nuclear Power Plant in North Gyeongsang was shut down at 8:36 a.m. due to overvoltage, according to the state-run nuclear power company. This is the second time this year that the reactor has had problems.

An official from the nuclear power company, however, said there was no immediate danger of a nationwide blackout from the shutdown of the reactors. Korea currently has 21 nuclear reactors that provide about 40 percent of its total electricity needs.

“A problem was detected in the generator, but it will take some time before we figure out exactly what caused the problem,” the official said. “There is no radiation leak or any safety threat.”

The aging reactors have been a topic of concern. The Kori Unit-3 reactor started its commercial operation in 1985 while the Uljin Unit-1, which has a capacity of 1 million kilowatts, began in 1985.

It is worrisome that a total of five reactors including the two that stopped are under maintenance. Uljin Unit-4, Uljin Unit-5 and Wolseong Unit-4 are under regular maintenance. Considering there are 21 nuclear reactors in the country, the fact that five reactors are suspended is significant. They account for 4.6 million kilowatts in total. Wolseong Unit-4 and Uljin Unit-5 are expected to restart operations on Dec. 21 and 22.

The stoppage occurred at a sensitive time as the electricity demand is expected to peak in January and February when the weather gets colder and there are concerns that an insufficient electricity supply could cause a blackout like the one in September.

Another worry is that the aging reactors may go down again at anytime. The Uljin Unit-4 reactor received regular maintenance but serious problems were found. The reactor was originally scheduled to resume operation within this year but the date was extended to after April of next year.

“What we are most worried about is the reactors breaking down,” said Kim Jae-chul, a professor at Soongsil University. “If the reactors stop during the coldest part of the winter, something disastrous could occur.”