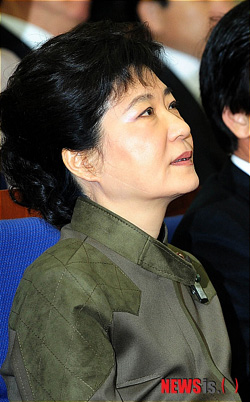 In a move to stop a possible exodus of lawmakers from the fraying Grand National Party, Representative Park Geun-hye, its former chairwoman, finally broke her silence yesterday and met with reformists to discuss a plan to salvage the party.

Park, the presidential frontrunner of the GNP, sat down with a group of reformist lawmakers in a conference room at the National Assembly yesterday evening from 5:30 p.m. until 7 p.m. to discuss the conservative ruling party’s fate.

“I think it is time to completely change the party,” she told reporters ahead of the meeting. “This get-together is about discussing the changes, so I am going to talk about that.”

After the meeting, Representative Hwang said that Park and reformist lawmakers confirmed they share basically the same opinion about the direction of reform.

“Park said the party needs reform and change much more radical than just a re-creation of the party, and the reformists agreed,” Hwang said.

Park will attend a party caucus today to listen to demands of lawmakers who want to reform the party.

On Monday, Park was chosen to be emergency leader of the party.

Park also said she regretted two lawmakers deserting the party. Saying they were frustrated, Representatives Jeong Tae-keun and Kim Sung-sik announced they were quitting Tuesday, after their demands to dismantle the GNP and create a new center-right party were rejected.

After concerns grew that their departures would open the floodgates for mass defections, Park told Representative Hwang Woo-yea, the GNP floor leader, on Tuesday night that she was willing to sit down with the reformists.

The junior lawmakers have complained bitterly about Park’s remaining tight-lipped on what she wants to do with the GNP’s reform measures. She also did not attend two caucuses Monday and Tuesday, and reformists increasingly demanded that she join the discussions.

“I have refrained from expressing my opinion as heated discussions were taking place at the lawmakers’ caucuses, and I didn’t want to be misunderstood as giving a direction,” Park said before she began talks with the reformists.

She also rejected criticism that she was not available to discuss the party’s fate after she was a no-show at the party caucus on Monday and Tuesday.

“I was told that the reformists wanted to talk about the party’s future, including the emergency council, so this meeting is arranged,” Park said.

Representative Chung Doo-un told reporters Tuesday that the two lawmakers’ resignations were not because they disagree on the proposals for reform but because they were frustrated with the lack of communication from Park.