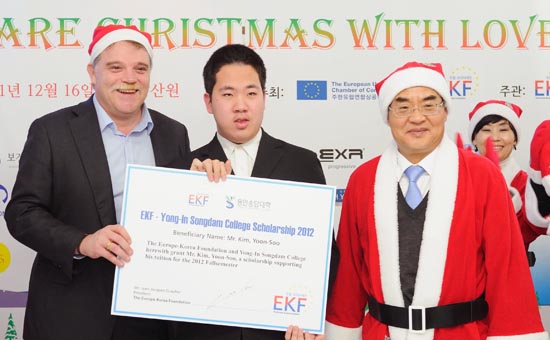 Jean-Jacques Grauhar, secretary general of EUCCK, left, a student from Namsanwon, center, and Sohn Gun-ik, vice minister at the Ministry of Health and Welfare Provided by the Europe-Korea Foundation


In celebrating the year-end festive season, the European Union Chamber of Commerce in Korea (EUCCK) and its philanthropic arm, the Europe-Korea Foundation (EKF), organized a charity event, Share Christmas with Love, on Friday at the social welfare center Namsanwon in Jung District, central Seoul.

Senior EUCCK officials, including Jean-Luc Valerio, president of EUCCK, and Jean-Jacques Grauhar, president of EKF and secretary general of EUCCK, distributed Christmas gifts in Santa Claus costumes to 51 children at the center with Sohn Gun-ik, vice minister at the Ministry of Health and Welfare.

EKF said it also provided a scholarship to a college student living in the center. EKF said in its press release that it seeks to strengthen the ties between the EU and Korea by means of fortifying corporate social responsibility of EU companies in Korea.