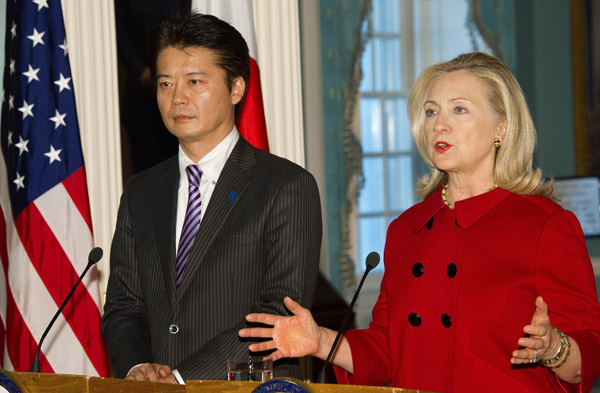 WASHINGTON - Concerned that recent progress in negotiations with North Korea over its nuclear program might be jeopardized by the unexpected death of Kim Jong-il, the United States on Monday called for a peaceful transition in the North.

“The United States stands ready to help the North Korean people,” said U.S. Secretary of State Hillary Clinton in a late statement on Monday, “and urges the new leadership to work with the international community to usher in a new era of peace, prosperity and lasting security on the Korean Peninsula.”

In an earlier meeting with Japan’s Foreign Minister Koichiro Gemba, Clinton said the U.S. wants improved relations with the North Korean people after Kim’s death and remain concerned about their well-being.

It was the first reaction from the U.S. government to the death of the North Korean leader.

The U.S. was expected to announce resumption of food aid to the North as early as Monday, which was supposed to be followed by the North’s official announcement of the suspension of its uranium enrichment program.

The two sides were known to have reached such a deal in bilateral talks over the past several months, raising expectations that the Obama administration’s “strategic patience” with the nuclear-armed country was finally bearing fruit.

A third bilateral denuclearization meeting was expected in Beijing this Thursday, but is unlikely to take place. The United States says there was never any confirmed plan to meet.

U.S. State Department spokeswoman Victoria Nuland denied that a deal had been made at a Monday press briefing.

The United States had yet to decide whether to express condolence over Kim’s death, she said.

“We need to see where they are and where they go as they move through their transition period,” she said. “We will obviously need to re-engage the North at the right moment.”

White House spokesman Jay Carney said it is too early to tell whether Kim’s death opens the door for better U.S. relations with North Korea.

Victor Cha, senior adviser at the Washington-based Center for Strategic and International Studies, said in an interview with the JoongAng Ilbo Monday that Kim’s death has eclipsed all ongoing issues such as food aid and additional talks on the North’s denuclearization, and is bringing the Pyongyang-Washington relations into greater uncertainty.

Cha said he can’t rule out a further provocation from the North if new leader Kim Jong-un comes under the influence of anti-American, hard-line military leaders.