A new Ray of hope for carmaker

A new Ray of hope for carmaker 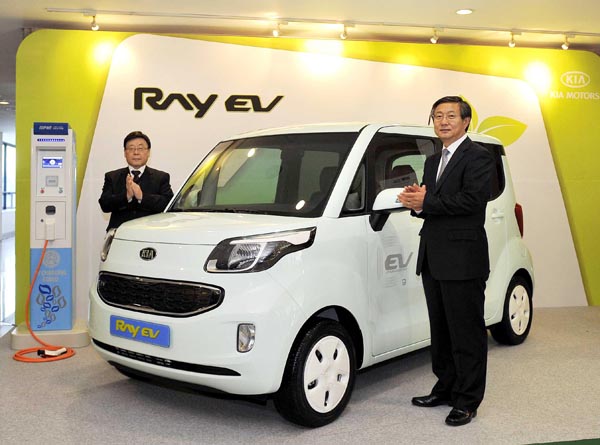 Hwaseong, Gyeonggi - As the global auto industry continues to contract and green technologies gain more traction, Kia Motors rolled out an electric version of its box-shaped Ray yesterday for a test drive as it pins hopes on this area as a new growth engine.

At first glance, the 10 sky-blue-colored cars waiting to be put through their paces yesterday at the Namyang Technology Research Center in Hwaseong, Gyeonggi, seemed no different from other conventional vehicles out on streets.

But inside the shiny chassis sat electric vehicle components produced by Kia, an affiliate of Hyundai Motor, based on a 100 billion won ($8.7 million) investment and 28 months of research and development.

The Ray EV is the first high-speed electric vehicle to be produced by the country’s second-largest automaker. It is based on its Ray cross utility vehicle (CUV), which was released last month.

He noted that the components featured in the Ray EV were built domestically, giving the automaker a price advantage.

“Hyundai Motor Group [which owns Hyundai Motor and Kia Motors] has been promoting the development of eco-friendly cars for the past decade as part of our efforts to be equipped with new growth engines,” he said.

However, the new model will not be available to the public just yet because the necessary infrastructure, such as charging stations, has not yet been put in place. The company has not revealed when it will go fully commercial with the vehicle.

Hyundai, the country’s largest automaker, launched the electric-powered Blueon last year, but only for the use of government officials. Just over 250 units have been sold so far.

In 2013, Kia will unveil an electric version of its Soul car, while Hyundai will release an electric sedan in 2014.

The Ray EV, which was released with a goal of mass production, can be manufactured on the same assembly line as conventional gasoline-powered cars. It features a 50 kilowatt motor and a 16.4 kilowatt-hour lithium ion battery produced by SK Energy.

The car can reach speeds of up to 130 kilometers per hour and go from naught to 100 kilometers per hour in 15.9 seconds, giving it a faster acceleration speed than gas-powered cars with 1-liter engines. This also makes it quicker on its feet than one of its chief rivals, Mitsubishi’s i-MiEV, which takes 16.3 seconds to reach the same speed.

According to Kia, the Ray EV’s battery can be re-charged in just 25 minutes, giving it enough power to travel 139 kilometers. The lithium ion battery has a lifespan of more than 10 years, meaning that most drivers who purchase a new model will never need to buy a replacement pack.

The automaker plans to produce 2,500 Ray EVs by the end of 2012, with initial buyers likely to be government agencies and public corporations.

Familiar concerns have arisen, however, about the battery capacity and the lack of infrastructure for commercialization. Electric car drivers often complain that the battery gets drained quicker at the height of winter and summer due to the power sucked up by the vehicle’s heater and cooling systems.

The Ray EV’s driving range drops 39 percent on a fully-charged battery when the heater is switched on.