SK chief Chey vows to get Hynix on track

SK chief Chey vows to get Hynix on track 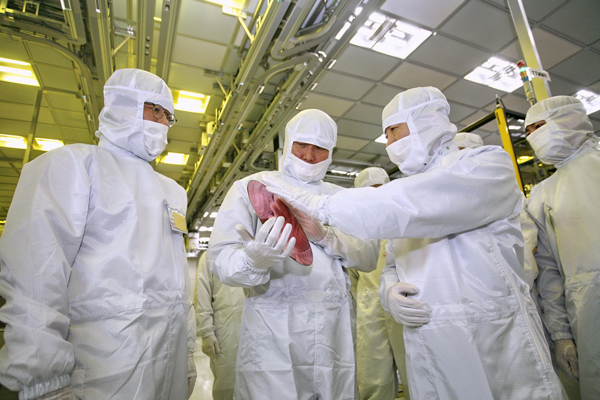 SK Group Chairman Chey Tae-won, currently under police investigation for embezzlement, made a surprise visit to a plant of Hynix Semiconductor to meet executives and employees yesterday.

Chey promised to normalize managerial operations as soon as possible at the company, which SK owns, and vowed to divert a large investment until next year at the meeting, which was held at Hynix’ headquarters in Icheon, Gyeonggi.

“As the chairman of SK Group, I will make Hynix successful and develop it as a new growth engine for the group,” Chey said.

“Hynix needs a transformation centered on high value-added products,” he said. “I will spare no effort to make large investments and swift decisions.”

It was the first time the chairman visited the workplace of Hynix since SK Telecom was selected in November as the final bidder for acquisition of the world’s No. 2 memory chip maker.

The country’s top mobile operator beat STX Group to take over Hynix by signing a 3.43 trillion won ($3.06 billion) deal for a 21.05 percent stake in the chipmaker.

“Not only for Hynix, but also for SK, this is a significant opportunity and a challenge,” he said.

“I have tried to find time to stop by several times since we won the bid in November but for various reasons have been unable to,” Chey said.

“But I felt that it was imperative not to postpone my visit any more considering the worsening market conditions and global financial woes.”

Chey also vowed to achieve qualitative growth for Hynix, which he envisioned as dovetailing with the growth of the national economy as Hynix chases increased global competitiveness.

When he arrived at the headquarters, Chey changed into a production line uniform for his tour of the plant and made a point of shaking hands with employees as he walked around giving them encouragement.

SK Group is considering making the largest-ever investment in the chipmaker’s history next year.

Prosecutors summoned Chey on Monday over suspicion that he embezzled part of a 280-billion won investment fund in collusion with his younger brother.