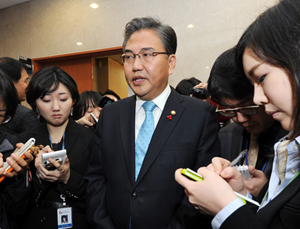 Park Jin, a three-term Grand National lawmaker who represents the strategic Jongno District of downtown Seoul, declared yesterday that he won’t seek re-election in the April legislative election, joining a wave of senior GNP politicians dropping out of the race to help the conservative ruling party freshen its image.

“Without giving up, we cannot see a change,” Park said yesterday at a press conference. “To salvage the sinking party from a desperate crisis, I will give up all vested interests and sacrifice myself for politics that can be trusted by the people.”

The 55-year-old lawmaker first entered politics by winning a by-election in Jongno on the GNP ticket. He was re-elected in 2004 and 2008. From 2008 until 2010, he served as the chairman of the National Assembly’s Foreign Affairs, Trade and Unification Committee.

“The GNP can only regain the public trust when it is reborn through self-reflection and reform, led by the emergency leader Park Geun-hye,” he said. “We must tear down the factionalist walls and open up the party, communicate candidly with young voters who are insecure about their future and wipe away the tears of the impoverished class.”

Representative Park’s decision yesterday is expected to add pressures on senior lawmakers representing GNP strongholds in Gyeongsang who were loyal to Park Geun-hye because he is a centrist politician who gave up a strategic district at the peak of his political career. Jongno is often called the “first avenue of politics” and it was significant for the ruling party’s three-term lawmaker to give up his district.

“With his decision, more lawmakers will feel that their turns are coming,” a party official said.

While Park gave up his candidacy from Jongno, Representative Chung Sye-kyun of the Democratic Unity Party has already registered his bid to run in the district. The GNP is likely to nominate another veteran politician to match Chung.

As the ruling party struggles to regain popularity through reforms and recruiting fresh blood, the opposition Democratic Unity Party took a step closer to elect its leadership.

A primary of 15 candidates will take place on Monday to select nine finalists for the main leadership race on Jan. 15.

The Democratic Unity Party also got a boost when Sough Gyeongsang Governor Kim Du-kwan announced his decision to join the party next year, reversing an earlier vow to stay independent.

Seoul Mayor Park Won-soon, who also has no party affiliation, also said he will join the DUP next month in time for the leadership election.