Lee says stint with Whitecaps likely to be his last

Lee says stint with Whitecaps likely to be his last 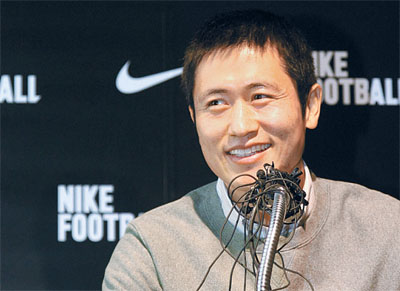 Veteran Korean defender Lee Young-pyo said that the Vancouver Whitecaps may be the last team of his playing career, hinting that he will hang up his cleats after spending one or two more seasons in Major League Soccer.

Lee held a press conference yesterday at Garden Place in Gwanghwamun, central Seoul, and said he is not planning to play in the Korea Professional Football League (K-League) even after his contract with the Whitecaps expires.

“I think this team [the Whitecaps] will be my last destination in my playing career,” Lee said. “Even if I’m still in the condition to play in two years, I am not planning to continue my career as a player.”

The 34-year-old Lee signed with the Whitecaps on Dec. 6 after spending two years with Al Hilal FC in Saudi Arabia. Lee said the Whitecaps originally offered him a four-year deal, but he asked the North American football club to reduce his contract terms to a one-year deal with another year as a club option.

The versatile left-back said in the past six months he has received the largest amount of offers in his career. Lee revealed he considered playing in the K-League again, but he chose MLS because he wanted to develop himself more.

“For the past six months, I thought lot about my future as a football player,” Lee said. “But in the end, I chose MLS because I think I can learn and do many things that I haven’t experienced before.”

Vancouver is Lee’s sixth professional team. After graduating from Konkuk University, Lee made his professional debut with the Anyang LG Cheetahs, currently FC Seoul, in 2000. He later played for PSV Eindhoven of the Dutch Eredivisie, Tottenham Hotspur of the English Premier League and Borussia Dortmund of the German Bundesliga before moving to Al Hilal in 2009.

It was reported that Lee traveled to North America for education purposes of his two children, but Lee denied that was the reason, emphasizing the decision was made only for his future career as a football administrator.

“Originally I was about to retire and study in England, but many people recommended me to go to the U.S.,” Lee said. “I didn’t understand that idea in the first place, but in the end the football system and business are part of sports anyway and I was surprised how well the MLS organization and clubs are doing.”

Lee said that he is especially interested in developing a high-quality football environment in Korea and this is also the reason why he is not playing in the K-League at this moment, because he wanted to do something more meaningful in the future.

“In order to upgrade our football, we need good coaches who were taught in good environments with good programs,” Lee said. “I don’t know if I will ever get an opportunity, but I think producing good coaches is the task for Korean football.”

Lee, who played in 127 matches for Korea during his 12-year international career, also talked about the issue of the recent coach replacement of the national football team. The Korea Football Association last week hired Jeonbuk Hyundai Motors coach Choi Kang-hee as new their skipper following the controversial dismissal of Cho Kwang-rae.

“I think everyone is working for a better future for Korean football, but in that process there will be misunderstandings and conflicts,” Lee said. “However, we have to consider that coaches are replaced too frequently. In my opinion, a national team coach should be guaranteed to have his job for at least four years.”

Lee will no longer play on the national team, along with Manchester United midfielder Park Ji-sung, after the Asian Cup in January. Korea, who hasn’t yet made it through the final round of the Asian qualifiers for the 2014 World Cup, has been struggling to find their replacements. However, Lee confirmed again there will be no returning to the national team even if the new coach Choi asks him to join the squad.