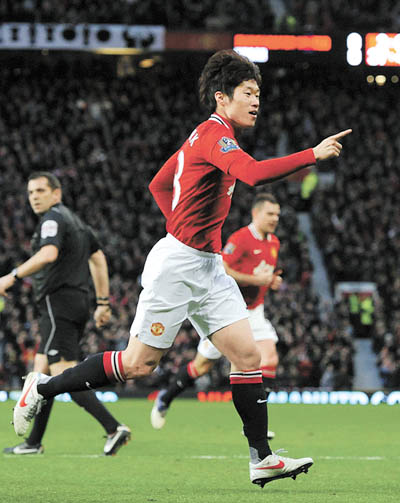 Park was on target after just eight minutes in Monday’s 5-0 rout of Wigan Athletic as United went level on points with Manchester City at the top of the table for just his second goal of the season.

“It’s our aim to be at the front. We always try to perform in this period of the season and we’re just trying to make our performance higher,” Park told Manutd.com.

“We’re still only halfway through the season and we will continue to press City.

“Quite a few players changed [against Wigan] compared to the last game, but we still kept up the same performance as we did against Fulham. It’s good for the team and it proves that our squad is strong.”

Sir Alex Ferguson’s side is now behind arch rivals City, who were held to a scoreless draw at West Bromwich Albion, only on goal difference thanks to their second 5-0 win in the space of a week.

At Old Trafford, United was already leading from Park’s early goal, the Korean’s first since United’s eight-goal demolition of Arsenal, when the game turned irretrievably against the visitors.

Wigan forward Conor Sammon extended his hand as he backed into United defender Michael Carrick, catching him square in the face and earning an instant, if harsh, red card from referee Phil Dowd in the 38th minute.

Three minutes later, Dimitar Berbatov had doubled United’s lead and the only question that remained to be answered was how many goals United could pull back on City.

Park had come up with the opening goal, although the hard work had been done by United left-back Patrice Evra who ghosted past Victor Moses and Antolin Alcaraz on his way to the by-line.

The Frenchman picked out the unmarked Park with a perfect pass and the 30-year-old midfielder completed the simple task of guiding the ball into the Wigan goal from 10 yards.

It was the start of an afternoon of relentless United pressure against a Wigan side that had done well in drawing with Chelsea and Liverpool on its last two outings.

Away from the DW Stadium, however, Wigan had no answer to a rampant United performance, all the more impressive for the fact that England forward Wayne Rooney started on the bench and injuries and illness forced the home side into playing Carrick as an emergency center-half and winger Valencia at right-back.

United might have doubled their lead in the 17th minute but Wigan escaped a strong penalty appeal after Alcaraz appeared to trip Javier Hernandez, an incident that was quickly followed by Gary Caldwell clearing a Nani shot off the line and Darron Gibson seeing a 20-yard shot deflected behind.

United opened the second period in similarly dominant fashion and Park should have secured a third goal for his team but headed too close to Ali al-Habsi from eight yards and could not reach the ensuing rebound.

David Jones placed a free-kick wide for Wigan but the respite was brief and Berbatov plundered his second, United’s third, after 58 minutes following a through ball from Valencia. The Bulgarian shrugged off Caldwell far too easily before turning and poking the ball in from 12 yards.

Two goals in the space of two minutes late in the game sealed United’s romp. In the 75th minute, Carrick turned the ball into the path of Valencia, from Caldwell’s headed clearance, and the full-back advanced into the area before unleashing an unstoppable shot from 15 yards.

Barely were the celebrations for that goal over than Alcaraz tripped Park on the edge of the Wigan area, presenting Berbatov with the opportunity to complete his hat trick from the penalty spot with a nonchalant finish.

“I’ve been saying for a few weeks that somebody was going to suffer against us and we’ve really hit good form now and got a goal threat from all departments,” said Ferguson.