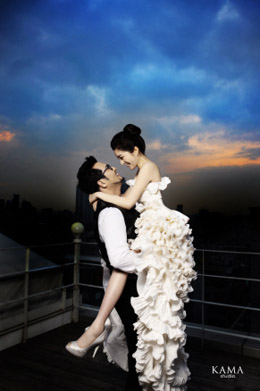 Singer Kim Tae-woo married his bride at a private ceremony at the Sheraton Walkerhill Hotel in Gwangjang-dong, eastern Seoul, on Dec. 26.

The bride is one year junior to Kim and works as a researcher at Seoul National University’s Life Science Research Center while also enrolled as a graduate student at Ewha Womans University.

The 30-year-old groom and his 29-year-old bride met 18 months ago, as Kim’s wrapped up promotion of his hit song “Saranabe,” which means “Love Rain.”

“I am sure that this woman will bring me much luck, joy and happiness. That’s why I’m marrying her,” the entertainer told reporters on the day of his wedding.

Kim’s new wife is four-months pregnant, a fact the entertainer revealed while commenting on a picture taken at studio in the lead-up to the wedding.

“This is my favorite. My bride is a bit heavy here as she is carrying our daughter. Please pray for the well-being of our child,” he said.

Kim defended the decision to marry after discovering the pregnancy, saying, “The child just hurried the process, but we had already talked of marriage, and it was really a matter of when we would.”

The former member of the boy band g.o.d. added that the day felt unreal and said words simply could not express the “anticipation and surrealism” that he was feeling.