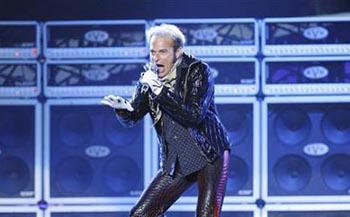 In a video posted on the band’s Web site, Eddie Van Halen, brother Alex and son Wolfgang play the hit “Panama” while Roth runs around on stage. Underneath reads “Van Halen On Tour 2012” with tickets going on sale Jan. 10.

No other details were announced, but the video confirms music industry buzz that the band is together again with Roth. An album is said to be in the works, too, after Van Halen signed a record deal in November.

A separate posting on the Van Halen News Desk Web site said the video was shot at the Roxy Theater along Los Angeles’ Sunset Strip while the band performed “a brand-new song.”

The news site speculated about a possible February release date for a new song or album, and said the record was produced by Ross Hogarth.

Van Halen’s relationship with Roth has been a stormy one over the years. Roth left the band in a bitter breakup in 1985, only to rejoin for a performance at the MTV Video Music Awards in 1996, then quickly departing in another bitter split. He returned to Van Halen for a tour in 2007-8.

The band, whose early hits include “Runnin’ With the Devil” and “Dance the Night Away,” was among the leading rock acts of the late 1970s, 1980s and into the 1990s when Sammy Hagar replaced Roth as singer.

Michael Anthony was the original bassist, but alongside Hagar he has joined another band, Chickenfoot. Wolfgang Van Halen, Eddie’s son, took over on bass.