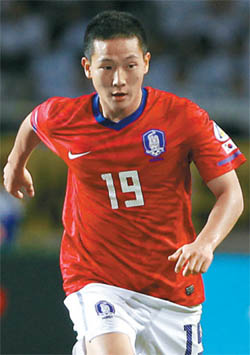 “An agreement was signed,” Jean- Raymond Legrand, Valenciennes president, was quoted as saying by AFP on Tuesday.

“He left Monday morning for a medical visit and everything should be finalized by the end of the week.”

According to Legrand, the 20-yearold attacking midfielder has agreed to a two-and-a-half year deal with the Qatari club. He also said that Nam, whose contract had been due to expire in June 2013 with Valenciennes, wanted more playing time and to move closer to his home country.

Nam, who signed with the northern French club in 2009 after spending a season with England’s Reading FC youth team, was expected to take a big role for Valenciennes after showing a promising performance last season.

He played 21 matches (including cup tournaments) and earned three assists.

However, since coach Daniel Sanchez took the helm for this new season, he has failed to earn favor. Playing most games as a substitute, he only earned one assist.

“Tae-hee is not playing as a regular member for Valenciennes,” Nam’s agent Kim Dong-gook of GSEN said on Tuesday. “Since he is not playing enough, he is worried about his physical fitness as well.”

Nam will join former Valenciennes teammates — defender Dame Traoré and coach Djamel Belmadi — at the Qatar Stars League champions and will have a chance to play in the Asian Football Confederation Champions League next year.

Lekhwiya is in Group C along with Sepahan of Iran, Al Nasr of United Arab Emirates and Al Ahli of Saudi Arabia.