The gender war rages on

The gender war rages on 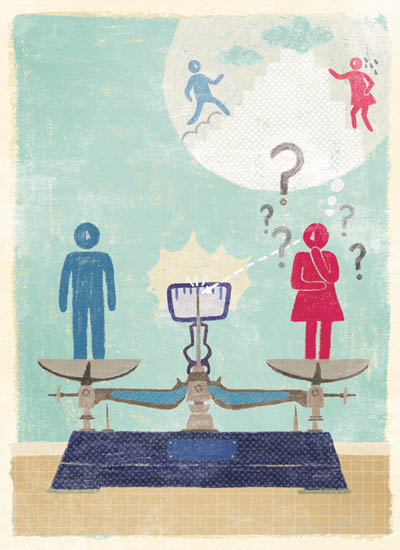 The Korean film “You’re My Pet” stirred up debate in cyberspace in November as a men’s group filed an injunction with the Seoul Central District Court to ban its release.

The romantic comedy centers on a so-called “gold miss” (a 30-something, well-educated, high-income, single female) journalist.

The role is played by actress Kim Ha-neul alongside a much younger, cute, unemployed man, played by Jang Geun-suk.

The man seemingly emerges from out of nowhere and volunteers to move into the female protagonist’s house and become her “pet.” Predictably enough, they eventually fall in love.

Man of Korea, the civic group led by a media-savvy male rights activist Sung Jae-gi, claimed the film based on a Japanese cartoon portrays a woman and a man as having an owner-pet relationship, and by equating a man with a dog, the film insults the “dignity of men.” The group caught wind of the film before it was released domestically and began to protest it.

“If a woman took the role of the pet, obeying the orders of the male owner like a dog, would the movie still be full of romance?” the group asked in a statement.

Many netizens brushed off the organization’s argument, saying it is “just a movie with a new concept,” but there were varying opinions, too. A blogger claimed a women’s group would have taken the same move against a film with the genders reversed, while another said Korean society is discriminating against men in favor of women, citing parking spots only for women at shopping malls and elsewhere.

Some went so far as to express hopes that the film could “provide a turning point for the men’s rights issue in Korea to be placed under the spotlight.”

The court soon dismissed the injunction proposal, saying the argument was “groundless and not convincing enough.” The movie was then released nationwide as scheduled and is set for runs across Asia next year on the back of the explosive popularity of actor Jang.

The small commotion could mark a significant event in which a group of Korean men officially complained about the illustration of an “unequal” man-woman relationship - in a rare reversal of what feminist groups have been doing to defend women’s rights.

“It might be the first time for Korean men to actually see themselves overtly objectified in popular culture,” said An Sang-wook, an indie musician in his late 20s who earned his master’s degree in gender studies at Seoul National University.

“We have already seen so many movies that commercialize women and have reached a stage that we almost take it for granted. The group’s request seems to be a knee-jerk reaction to their first time seeing something like this.”

Bae Eun-kyung, a sociology professor who specializes in gender, sexuality and feminism theory at Seoul National University, linked Man of Korea’s move to “a manifestation of Korean men’s anxiety.”

“Korea’s young men - those 20-somethings in particular - feel extremely insecure,” she said. “They are forced to spend two years in the Army while their female classmates at college focus on studies and job market preparations during the same period. They have to start from scratch after returning from military service, when their female counterparts have already become powerful candidates in today’s fiercely competitive job market. Some of those men who feel they have lost the privileges they used to enjoy in the past to women seem to develop hatred against them instead of exerting efforts to raise their competitive edge.”

The traditional patriarchal system in Korea under which the father, the sole source of earnings in the household, retained “absolute power,” has weakened as the mother has also started bringing home the bacon, Bae said.

“In the past, the only thing a man needed was a job. That guaranteed affection, recognition, respect and care from their wife and kids,” she said.

“But since the burden of financially supporting the family is now being shared by the wife, men’s status in the family has been reduced. I see men from the younger generation that feel nostalgic for patriarchy.”

Now that life for men has become tougher in today’s Korean society, the question is whether the status of women has improved as much compared to the past. The answer is not necessarily.

Two weeks ago, Samsung Electronics promoted its first woman as high as executive vice president in its annual reshuffle, and the news has been making headlines since. The female executive to break the glass ceiling at the industry bellwether is Shim Su-ok, a 49-year-old global marketing expert, who joined the firm in 2006 from P&G.

She has now added her name to the list of the so-called “alpha females,” who are increasingly gaining a foothold in the country’s legal, administrative, diplomatic, medical and journalism fields. Using the legal community as an example, female judges, prosecutors and lawyers accounted for 21.7 percent of the field as of 2010, almost a six-fold increase from 3.7 percent a decade ago, according to April data from the state-funded Korean Women’s Development Institute.

Since 2007, women have accounted for more than half of those who passed the annual foreign service examination.

With the rise of these young women, it appears the historically Confucius nation where gender inequality was widely accepted until the early 1900s has taken a huge step in narrowing the gender gap.

However, gender experts agree that the issue of discrimination against women in this country has yet to improve in tandem with the notable economic achievements that have propelled the country to its status as a leading economy.

“The latest buzzwords such as ‘alpha girl’ or ‘gold miss’ that have been coined to describe women of higher education and income level make it appear that Korea is now increasingly becoming a female-dominant nation,” said Kim Kyung-hee, a researcher with the institute. “The reality is actually worse than how ordinary people perceive. I’m afraid to say that Korean women’s social status - especially with regard to their economic and political power - is still much lower than that of other countries of similar economic size.”

A range of gender equality indices from international organizations underpin Kim’s argument. For instance, Korea placed 107th out of 135 countries in the Global Gender Gap Report 2011 from the World Economic Forum. What is more surprising is that Korea’s standing in the index that encompasses four categories - health, education, and economic and political empowerment - retreated three places from a year earlier.

And the gender gap in economic activities is still huge. Of Korean women aged 15-64, only 54.5 percent were workforce participants in 2010, far below the OECD average of 65.8 percent, according to a report from the Samsung Economic Research Institute.

Korea also had the highest gender wage gap, the difference between male and female earnings, among OECD members at 38.8 percent in 2008, when the latest data were available, while the OECD average was 16 percent. The data means that if a Korean man earns 1 million won ($865) per month, a Korean woman gets only 712,000 won.

Kim Jung-sook, chairwoman of the Korean National Council of Women, a women’s group, has pointed out the seriously low participation rate of Korean women in politics.

“Korea is the only country with this kind of portion of women in politics at a mid-10 percent range among all OECD members,” she said at a seminar last month. “Even in an African country like Rwanda, female politicians account for 50 percent. Isn’t it pathetic?”

Scholars talk about economic and political power when it comes to gender issues because they are the two critical factors that create an environment to allow women to lead a free life, which eventually determines their social status.

Professor Bae of Seoul National University said women with little money and power have no choice but to have their social status and living standards diminished and defined by their husbands or siblings.

The noticeably strong wave of female professionals in medical, legal and public service sectors in recent years is, in fact, evidence that women are not in a very good position in the country’s corporate sector, according to academics’ analysis.

Having realized that women still have limited chances in outpacing men when it comes to competition in a corporate environment, today’s smarter women have begun opting for occupations that guarantee a comparatively equal playing field, Bae said.

At SK and LG, two of the country’s largest local corporations, women accounted for only 20 percent of entry-level workers last year. Shim Su-ok, the aforementioned new executive vice president of Samsung Electronics, is actually one of the few female executives that accounted for only 4.7 percent at corporations with 1,000 or more employees as of 2010, according to a survey by the Korean Women’s Development Institute.

“It is true that life for both women and men here has become tougher with the bad economy,” Bae said. “But society should continue paying attention to women’s issues - especially concerning the labor market - since they still remain on the weaker side.”

A June report titled “A Framework for Growth and Social Cohesion in Korea” from the OECD provides some general yet comprehensible advice on improving the situation. It said, “Workplace cultures have to change and give all workers a fair chance to fulfill their individual aspirations and provide for their children. ... The remuneration system should be reformed into an essentially performance-based system to provide greater incentives for women to work.”