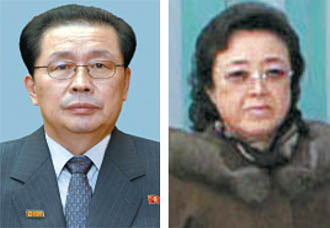 The uncle and aunt of new North Korean leader Kim Jong-un continue to emerge as key powers behind the throne, with Jang Song-thaek finally clinching a military title he had long been denied.

Jang, 65, husband of late leader Kim Jong-il’s beloved younger sister Kim Kyong-hui, was photographed at the Kumsusan Memorial Palace paying respects to the late leader with his heir Sunday. He was dressed in a four-star general’s uniform instead of his usual business suit.

Jang was made a vice chairman of the National Defense Commission, the country’s top decision-making body, in June 2010, which was seen as a way of protecting Kim Jon-un from hostile forces. His wife was made a four-star general in September 2010 and also director for the light industry department of the Workers’ Party.

Kim Kyong-hui is considered the most trusted protector for her 20-something nephew. But she is also considered to be seriously ill.

In footage broadcast by the official Korean Central Television on Sunday Jang was seen standing next to Ri Yong-ho, chief of the general staff of the Korean People’s Army, who was left of Kim Jong-un.

His wife was seen in the front row of attendees at the event. On Dec. 20, when North Korea first showed the late leader’s body on his bier at the Kumsusan Mausoleum, she was in the second row of officials. Kim was the 15th person on the North’s national funeral committee list, which has provided a kind of map of Kim Jong-un’s inner circle. But she was the fifth person to pay respects at Kim Jong-il’s coffin on Dec. 20 and 23.

Analysts expect a group of insiders, from within the Kim clan and the military, will steer national affairs for the inexperienced Kim Jong-un.

Jang emerged as a key power broker when Kim Jong-il was felled by a stroke in August 2008. Both he and his wife took the opportunity to restrict access to the leader by other officials, according to analysts.

Jang also reportedly took care of the affairs of Kim’s oldest son Jong-nam, who fell out of favor after being caught trying to sneak into Japan to visit Disneyland in 2001, but encouraged Kim to select his youngest son Jong-un as his successor. After Kim recovered from the stroke, his sister Kim Kyong-hui accompanied him on most of his so-called “field guidance trips,” on which he would visit military installations, farms and factories.

Some analysts say Kim Jong-un could have granted the military rank to Jang. “Kim Jong-un, whose succession is well on track, must have felt he would do something for his uncle, who helped him take control over the nation,” Jeong Seong-jang, a researcher at the Sejong Institute, said. “But it may be a stretch to say Jang will soon have all the power now that he has military rank.”

Analysts say that he may have more interest in liberalizing North Korea’s economy. In October 2002, at the heyday of South Korea’s “sunshine policy” toward the North, he was part of a delegation that spent nine days in Seoul observing its economy.

As first deputy director of the Workers’ Party’s Organization and Guidance Department, Jang visited the offices of Samsung Electronics, COEX Mall, local factories, rode the subways and even indulged himself at a “room salon,” or hostess bar. South Korean officials say Jang expressed a deep interest in the market economy. Sources say Jang asked the South Korean government to appoint former Daewoo Chairman Kim Woo-choong to be the director in charge of their special economic zone in Sinuiju.

Jang’s interest in the market economy and South Korea may have been too keen for Kim Jong-il. He was purged to lesser jobs in the countryside and disappeared from the official media in July 2003. He re-emerged in January 2006 as first deputy director for the Workers’ Party’s capital construction department.

Kim Kyong-hui was apparently loved by both her father, North Korean founder Kim Il Sung, and her brother Kim Jong-il. The younger Kim apparently thought her status as the founder’s daughter was significant, and gave her the four-star general rank in 2010 because he trusted her, after decades of struggle in the Kim dynasty, to protect his son. Her marriage with her husband isn’t particularly good, analysts say, but they support each other in the power struggles within the inner circle.